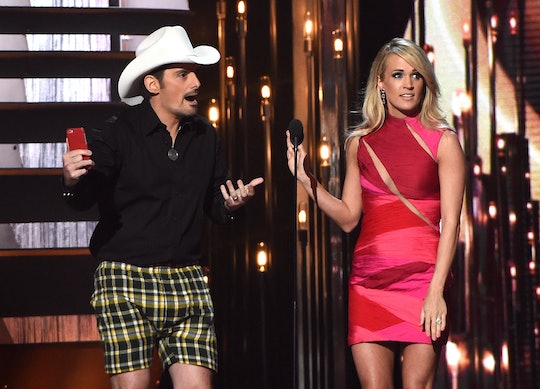 Carrie Underwood and Brad Paisley hosted the 2015 Country Music Awards on Wednesday night and the result, at times, was pretty awkward. The pair started the evening with a Star Wars-themed opener, but then segued into a duet of “Everything is Cray Cray,” meant to span the audience recent headlines and offer some light roasting to start the show. Again, that idea seems mostly fine. But then, the hosts dove into a series of jokes that somehow managed to include a transphobic remark about Caitlyn Jenner. Yes, it confused me, too.

Strumming his guitar, Paisley ran through a few of the recent 2015 happenings that seem “totes cray” in the mad, mad world we’re living in. “Watch me whip, watch me nae nae,” sang Paisley. Not sure why such a fun dance is confusing, but I’ll go with it. “Man buns,” added Underwood. I think man buns are completely sexy, but to each her own I guess. “McDonald’s breakfast all day now,” sang Paisley. “Bruce Jenner’s a babe now. And Trump’s leading in the polls.”

And that's what got me. No, not the Trump thing (because that is cray). The "Bruce Jenner" thing. First of all, her name is Caitlyn Jenner. We know all know this by now. And while some of her family members have admitted to having a tough time making the name shift as part of Caitlyn’s transition, the rest of us should have no such problem with it.

And the “babe” part? It’s as if the hosts are unwilling to accept Caitlyn as a woman unless they can use it as a way to reduce her. Can we just agree that these kind of insults are not gonna fly in 2015? Plus, Caitlyn came out — in her now-infamous "Call Me Cait" Vanity Fair cover in July. It's November. Can we all get over it?

The CMAs are known for roasting guests in the opening monologue. It’s part of what audiences have come to expect. But the good thing, at least, is that not everyone gave this one a laugh. Unsurprisingly, folks on social media weren’t pleased with the “joke” at all.

But perhaps the best response of all to these kinds of barbs can be gleaned from Jenner herself. This summer, she addressed these exact kinds of insults during her ESPY award acceptance speech when she said:

If you want to call me names, make jokes, doubt my intentions, go ahead. I can take it. But the reality is for the thousands of kids out there coming to terms with who they are, they shouldn’t have to take it. So for the people out there wondering what this is all about, whether it’s about courage or publicity, it’s about what happens from here. It’s not just about one person. It’s about thousands of people. It’s not just about me, it’s about all of us accepting one another.

The full clip of the opening monologue for the 2015 Country Music Awards is here, or available on YouTube.