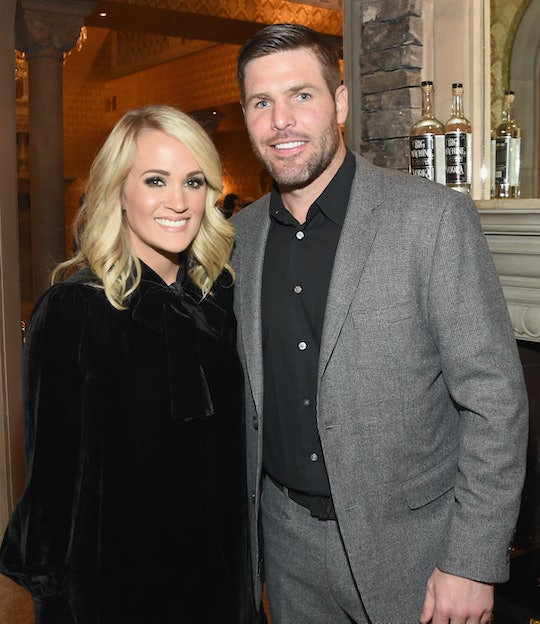 Carrie Underwood and her husband, retired hockey player Mike Fisher, are so adorable together. And every once in a while, the country singer shares a lovey dovey post about her other half on social media. For example, Underwood and Fisher recently celebrated a special anniversary, and her Instagram post about it is so sweet, it will make your heart melt.

On Tuesday, Underwood shared with her followers on Instagram that she and her husband had a "rare" night out on the town, along with some some "amazing food" from Italian restaurant Del Posto, to celebrate a special date in their live. No, they weren't celebrating their wedding anniversary on Tuesday (they'll be married for 10 years on July 10, 2020) — they were celebrating the anniversary of the day they met. Awwwww.

"11 years ago yesterday, I met the love of my life...patient, kind, the best dad, handsome, of course! Someone who accepts me and all my flaws...the same as me in many ways...opposite in some," Underwood captioned a sweet photo of herself and Fisher. "But he is my match. The iron to sharpen me....tonight we celebrated at @delposto. A rare night out with amazing food and even more amazing company and conversation. Here’s to so many more years together. Love you, babe!"

Underwood and Fisher's relationship started when they met 11 years ago in October 2008 through the singer's bassist, Mark Childers, according to Country Living. Underwood was reportedly skeptical being set up and going on a blind date (especially since Fisher played hockey in Canada at the time, as Country Living explained). So, Underwood met him for the first time in a place where she felt really comfortable meeting strangers — at a meet-and-greet for one of her concerts, according to Entertainment Weekly.

After hitting it off backstage, they waited two months (because of their busy schedules) to go on their first date, Underwood told Glamour in 2012, according to Taste of Country. "We talked on the phone for almost three months before we actually got together. That was good for us," she said. "Then our first real date was on New Year's Eve, and our first kiss was when the ball dropped."

Based on this knowledge, it's easy to understand why the day they met is so special to them. They had time to develop feelings before going on a date and then embarking on a whirlwind relationship. How special is that?

Underwood and Fisher have been through a lot together since that day. They've had a long distance relationship, gotten married, and welcomed two sons, Isaiah and Jacob, together, according to E! News. With all that they've been through, Underwood is certain that Fisher is her soulmate. "I feel like he is the person I was meant to be with," Underwood told People in June. "I had dated guys and kind of knew, like, 'No.' Nothing was ever really wrong, but nothing ever really right, either. With him, it was like a good partnership. It was an easy relationship to be in."