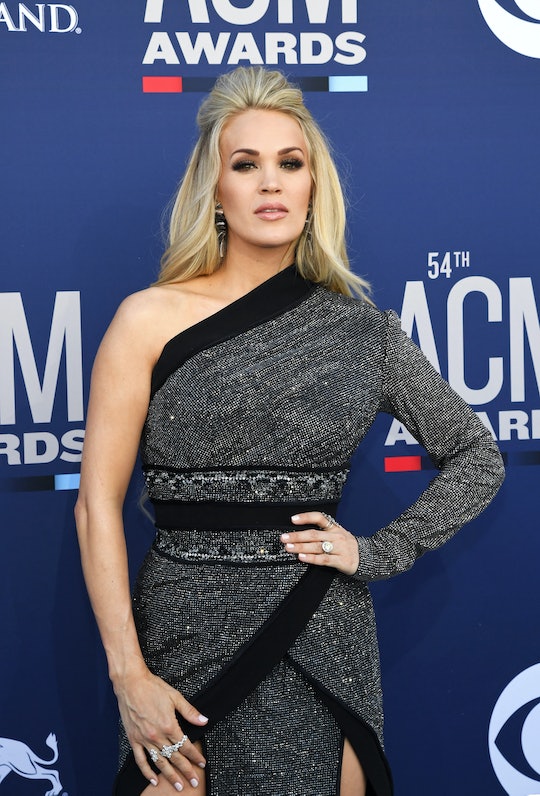 Carrie Underwood Is Multitasking #MomGoals While "Pumping" In This Stunning Selfie

Balancing motherhood and a career can be difficult, but some people make the delicate dance look easy. Like Carrie Underwood who pumped breast milk in a stunning selfie while en route to the Academy of Country Music Awards on Sunday night, showcasing that the country star is one multitasking mama.

In the photo, posted to Underwood's Instagram account, she's all dressed, dolled up, and ready to go to the awards show. The 36-year-old mom of two was, as she revealed in her post, due to perform at the show and joked in the caption that she was "#Multitasking" ahead of the big night. Underwood added a relatable laughing and shrugging emoji to her post for good measure.

The stunning selfie shows the singer was all smiles as she prepared to take the stage, which People reported, was the first time she had since giving birth to her second child, Jacob, who's now 2 months old.

Underwood's fans definitely found the image relatable, as evidenced by the comments. One praised her for being "awesome," adding a message of thanks to the singer for "being real with us moms out here." Another called her a "Hot mama."

Other fans shared their own multi-tasking mom moments. "Pumping in my car before going into the gym, thanks for being relatable. It can feel so isolating some days!" one Instagram follower shared.

This is hardly the fist time Underwood — who was nominated for female vocalist of the year, performed with Maddie & Tae, Mickey Guyton and This Is Us star Chrissy Metz at the ACMAs, according to Billboard — has been relatable about motherhood.

During the pre-awards show red carpet, for instance, Underwood spoke with Extra! about motherhood and got candid about some of the negatives, admitting that she wasn't getting much sleep since welcoming her second child. While speaking with Extra!, Underwood revealed that while she woke up with a migraine, citing sleep deprivation as the likely cause, that's all part of being a mom, and is totally worth it in her opinion, saying:

It's part of life, right? I was like...of all days, today. I think it was partially due to sleep deprivation but that's okay. Yes, for the best reason ever. The only thing that saves me is at four o'clock in the morning when he is just smiling at me, and I'm like thank you. This morning he was screaming. That was not fun, but normally he gets up and wants to eat, and is just happy and smiling and so sweet.

Underwood got equally real with fans in March, after an especially difficult afternoon out with her newborn son. In a tweet, Underwood sent a thank you to "the nice lady who offered to buy me a drink at lunch today," revealing that during the meal Jacob wound up "naked," "poo covered" and "screaming." Underwood added in her tweet that she learned an important and relatable lesson.

"Thanks to the nice lady who offered to buy me a drink at lunch today after I carried my naked, poo covered, screaming baby up the stairs and back to my table. It was a rookie mistake leaving the diaper bag at the table and only taking a diaper and 2 wipes. Never again," she tweeted.

Although Underwood did not win female vocalist of the year at this year's ACMs — that honor went instead to Kacey Musgraves, according to Entertainment Weekly — she won some serious #RelatableMom points with fans on Instagram. It's not every day you get a real-life look at a celebrity's life, and Underwood consistently keeps it as real as possible with her fans and followers — breast pump selfies and all.