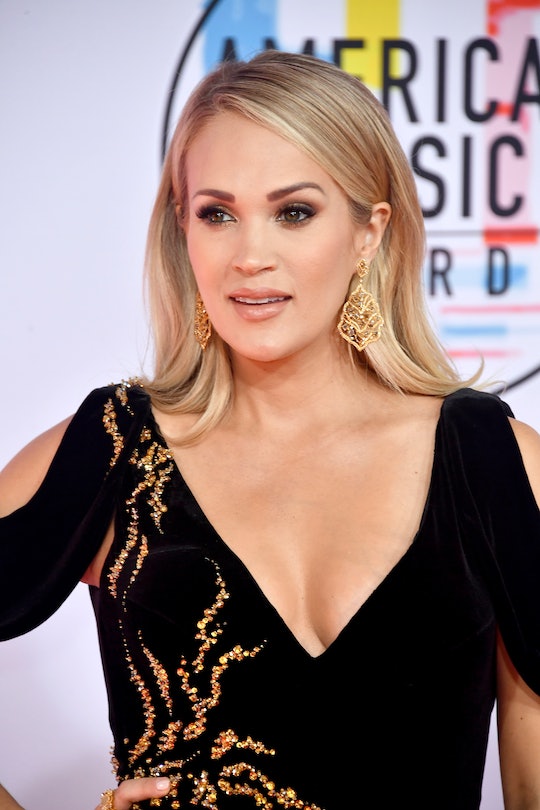 Everyone knows that a truly talented singer can make pretty much anything sound good... but even this was kind of a surprise. Carrie Underwood sang to her son Isaiah, while holding itty bitty baby Jacob, with a helium voice, and somehow it sounded better than most people could sing it normally.

Underwood's husband Mike Fisher uploaded the video of the mom of two cuddling her infant son Jacob while singing to her 4-year-old son Isaiah. Given that it was Isaiah's birthday, while still holding the baby, Underwood inhaled a bit of helium from a yellow balloon, and proceeded to sing "Happy Birthday" in a ridiculously high-pitched tone, all while somehow, mysteriously, sounding absolutely perfect. Of course, Isaiah seemed to get a big hit out of his mom's personal performance, laughing along as she riffed the end of the verse.

"Celebrities can be real too. Thanks for sharing. Love it!!" one fan responded on the post.

"It really is lovely to see these moments still take place inside the lives of celebrities! It really shows how down to earth you and Carrie are. You both are doing a wonderful job. Thanks for sharing your family," said another.

Underwood gave birth to her second son earlier this year, E! News reported, and on Jan. 23, she announced the arrival of her new baby on Instagram, with photos of herself, her husband and Isaiah all holding the newest member of the Underwood-Fisher clan.

"Jacob Bryan Fisher entered the world in the wee hours of the morning on Monday... his mom, dad and big brother couldn’t be happier for God to trust them with taking care of this little miracle!" she wrote on the post. "Our hearts are full, our eyes are tired and our lives are forever changed. Life is good..."

Despite all the fun and bliss that they're experiencing now, the family has been through a lot over the past few years. In fact, Underwood previously opened up about suffering multiple miscarriages before she was able to get pregnant with Jacob.

“I’d kind of planned that 2017 was, you know, going to be the year that I work on new music, and I have a baby,” she said during an interview with CBS Sunday Morning. “We got pregnant early 2017, and it didn’t work out.” However, she went on to say that it was then that she leaned on her faith, and trusted it would all work out in the end. "In the beginning, it was like, ‘Okay, God, we know this is, just wasn’t Your timing. And that is all right. We will bounce back and figure our way through it,'" she told CBS Sunday Morning.

However, that wasn't all. Later in 2017, Underwood suffered a pretty serious fall in her home, during which she had a laceration on her face that required more than 40 stitches, and a broken wrist, Us Weekly reported.

“I just fell down. I was taking the dogs out to go do their thing before bed, and I just was clumsy and I tripped,” she said on SiriusXM’s Storme Warren Show. “I held on to the dog leashes in my left hand and went to catch myself with my right and just missed the step. There’s one lone step … And I said, ‘If I had fallen anywhere else, I would have been absolutely fine.’ But it’s just because there was — I went to catch myself and I missed.”

However, she also mentioned that her mother advised her not to worry about what other people were saying, which she wholeheartedly agreed with. “But I try not to worry too much about it. My mom will be like, ‘Did you see they are saying this about you?’ And I’ll be like, ‘Mama, I don’t care. I’m just trying to raise my son and live my life,” she said at the time, according to Us Weekly.

It's clear that, despite the ups and downs, Underwood and Fisher have had a great ending, enjoying life as a happy, healthy and mostly hilariously entertaining family of four.