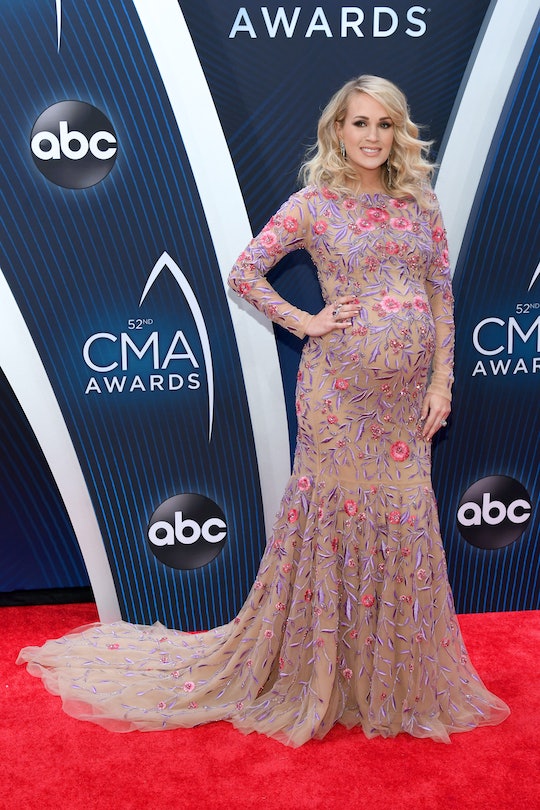 The wait is finally over. After what seemed like months of pregnancy and plenty of anticipation from fans, Carrie Underwood finally made her very big announcement — she had her baby! Fans will also be delighted to know that Carrie Underwood's baby's name is traditional, super sweet, and perfect for their family.

There is so much that goes in to picking the perfect name for a newborn. But clearly Underwood and her husband, former hockey player, Mike Fisher, have got the science down pat. Underwood announced their son's name on Instagram, in a post announcing his arrival as well. The new little Fisher will be called Jacob Bryan Fisher.

"Jacob Bryan Fisher entered the world in the wee hours of the morning on Monday," Underwood captioned the carousel of three shots. "His mom, dad and big brother couldn’t be happier for God to trust them with taking care of this little miracle! Our hearts are full, our eyes are tired, and our lives are forever changed. Life is good..."

This name could really not be any more perfect when you think about it. It's great, it's adorable, and fits in perfectly with their family — as they're already parents to a 3-year-old son named Isaiah Michael Fisher, according to People. And their son's name, Jacob Bryan, meshes so well with his big brother's.

Not only is this moment super exciting for fans, but imagine how the couple feels right now. After months of waiting, they're finally able to put a face and a name to their new addition. And both of those things could not be any more perfect.

But this wasn't necessarily the ideal name that Isaiah wanted to name his little brother. During an appearance in September on The Tonight Show with Jimmy Fallon, Underwood explained that Isaiah had been wanting to name his little brother after himself. Underwood said they asked their son for his input, but his reply was certainly unique. She explained:

We did ask him, and he did say, "Isaiah Michael Fisher," which of course, is his name, and would be confusing. He wants to name everything his name because he thinks it's that special.

Although Underwood and Fisher didn't exactly pick the same name for their sons (that would get a little confusing in their household, don't ya think?), it's likely that Isaiah thinks it's just as good as his own name.

Isaiah's name is based in the Bible, according to CMT and means "Salvation of the Lord." With there being so much meaning in such a small name, it makes sense why their new son's name would be so special. Jacob is also a biblical name meaning "supplanter," according to BabyCenter. In the Bible, it's the name of the father of the 12 sons whose names then became the names of the 12 tribes of Israel.

Fans have waited a long time for Underwood and company to make this huge announcement about her son's birth and his name. Needless to say, her pregnancy timeline felt like a very long journey. In August, Underwood took to Instagram, where she revealed that she and Fisher were expecting and would be "adding another fish to our pond," according to Country Living. So adorable. And just three months later, Underwood revealed that she was expecting a boy and she was due in January, according to Country Living (a double whammy).

But now, the only updates that fans will have to look forward to from Underwood are ones about her son — and those are so much better than pregnancy updates. Thank goodness the little boy is finally here.