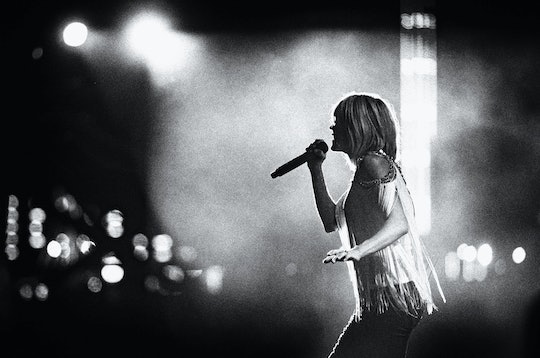 The Academy of Country Music Awards are arguably known for celebrating country music's best, brightest, and most up-and-coming stars, but there's no denying that it's also for highlighting important social issues as well. That's never been more apparent than Carrie Underwood's "Church Bells" performance at ACM Awards, which highlighted the devastating physical and emotional affects of domestic abuse, and proved that there's no such thing as an inappropriate time to call for necessary, long-awaited cultural change.

The lyrics to "Church Bells" are nothing short of poignant, especially for someone who acutely and painfully understands the darkness that is domestic violence firsthand. As a survivor myself, I cannot keep the hairs on the back of my neck from standing up every time I hear Underwood falsetto incredible lyrics like:

It was all bruises, covered in makeup; dark sunglasses; and that next morning, sitting in the back pew; praying with the baptist.

The first-time mom and country music superstar could have easily picked a more light-hearted, easily digestible song to sing at the show, but the fact that she chose one that highlights an issue that plagues 38,028,000 women who have experienced physical intimate partner abuse during their lifetimes is not lost or unappreciated. In fact, it's wildly celebrated and so very welcomed. Perhaps that is why Underwood chose to perform such a song on a national, widely-viewed stage; because 4,774,000 women experience domestic violence every year and, until something changes, that number will never subside.

Her ACM Awards performance also marked the debut of "Church Bells," which sent reverberations through all of Twitter as new and old fans alike heard the powerful ballad for the first time. Here are just a few of the many reactions, that do nothing if not reinforce the fact that this song, like so many of Underwood's other hits, is utterly important:

Carrie Underwood didn't need to look "hot" or "fierce" or "slay" to make this performance a memorable one. It was the message behind her incredible voice that I, and many like me, will remember. So, from one domestic abuse survivor, I can't help but say: Thank you, Carrie. Thank you.