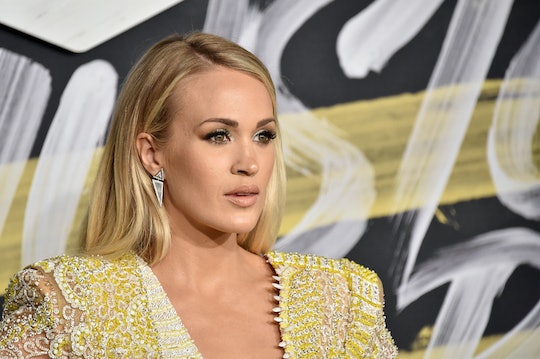 Kids have a wild sense of imagination, which allows them to create dream worlds and characters right in their own home. No matter how many toys parents may give their children, nothing compares to their own imaginations, and Carrie Underwood now knows this to be true. Seriously, every parent need to see Carrie Underwood's post about her son's new favorite toy, which might be the most hilarious and imaginative thing that moms will see all day.

Underwood is the mom to son, 3-year-old Isaiah, with her husband, Mike Fisher, according to People. Although some people might feel as if it takes a lot for a kid that young to be entertained, Isaiah is very much unlike your average 3-year-old. In a new post to her Instagram on Wednesday, Underwood revealed that her son had been keeping himself entertained with one very special object. No, this object isn't some shiny or fancy toy that parents spend months on a waitlist waiting to get their hands on it. Underwood revealed that Isaiah's current favorite toy can be found in the kitchen — because it's a potato. A potato.

If some parents find this to be a little bit unbelievable, it sounds like Underwood is totally with you. "This is what my kid has been playing with for the past 2 days," Underwood captioned the photo. "Yes, it's a potato. Yes, he has other real toys. Yes, I know it's weird."

In the photo, the potato looks so happy to be there with its hand drawn smiley face an all, probably done by Underwood or Fisher. As if this potato's life could not be any better, it's sitting in a doughnut shaped miniature pool float. But if Isaiah loves the potato as his toy, then that is just adorable. And Underwood's fans were super supportive of her son's new favorite toy and took to the comments section of her photo, where they had only encouraging things to say about the family's newest starchy addition.

"I think it's very inventive," one commenter wrote.

"Love it!" another commenter added. "It is the simple things that are more fun. Keep the imagination growing."

Most people assured Underwood that her son's newfound obsession is completely normal. "It's not weird!" one commenter wrote. "Why do we spend so much money on toys when all they need is their imagination?"

That commenter has a point — according to one report conducted in the United Kingdom, twice as many parents reported that their children preferred playing with boxes as opposed to toys, according to Parenting. And while a raw potato isn't necessarily a cardboard box, the concept is the same — Underwood's son looked at an ordinary object and saw a very fun toy in it — this is called "pretend play," according to the American Psychological Association. Surely, most parents have been in Underwood's position before; their kids might have a playroom full of toys, but at the end of the day, they would rather play with the cardboard Amazon Prime box on the floor, which is totally OK.

When children engage with a cardboard box, or a spud out of the pantry, like Isaiah, they are pretending like it is the most fun toy in the world, which is a great thing. This, in turn, "helps them gain an understanding of the world," according to Parents, which is a pretty good thing to learn at such a young age.

In addition to having a pretty solid imagination, Isaiah already seems to be pretty talented in other ways, as evidenced by Underwood's Instagram. Underwood has shared with her followers that Isaiah can name the animals on Noah's ark, according to CMT, and leant a hand in shaving his dad's beard off his face last month, according to TODAY.

With those skills and that kind of inventive thinking, Isaiah is already proving himself to be one innovative young boy.