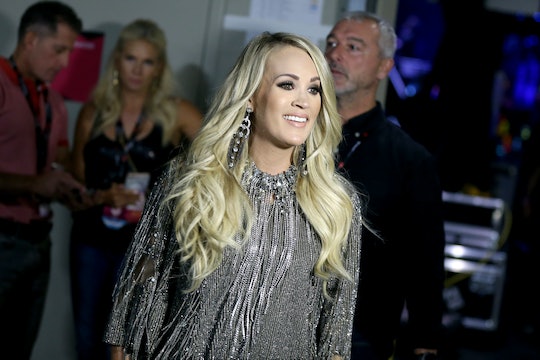 Carrie Underwood's Tweets About Motherhood Will Have Parents Cracking Up

From the outside, singer Carrie Underwood makes it seem like she has parenting under control. But on Twitter, the mom to two young boys is a little more honest with her followers. This is why Carrie Underwood's tweets about motherhood will have parents in stitches from how relatable she is.

In January, Underwood welcomed her second child with her husband, former hockey player Mike Fisher — a son named Jacob, according to Country Living. Their new addition joined his big brother, four year old Isaiah to round out their family, and they could not be cute enough. But even Underwood knows that the reality of having two young boys under the age of three is hard work, especially while balancing her career as one of the biggest stars in country music around.

This is why Underwood's Instagram posts and tweets from this weekend about the realities of parenting while being a celebrity are so relatable, even to those who aren't Grammy award winning singers.

Take Underwood's tweets about this weekend, for example, which had her followers in stitches because of how real the star is. On Sunday, Underwood took to Twitter to share her recent adventures in being a mom, which sounded so chaotic, it was a little too relatable.

On Sunday, she tweeted about her lunch out in Jacob, which left her covered in poop. "Thanks to the nice lady who offered to buy me a drink at lunch today after I carried my naked, poo covered, screaming baby up the stairs and back to my table," Underwood treated, writing that she only took one diaper and two wipes to change her little boy (total mistake).

And on top of all of this, Underwood's three year old seems to be causing her just a little bit of trouble, too. She tweeted that her oldest son came up with one hilarious and awful nickname for her — "Carefree Underwear." "This is basically elementary school all over again," she tweeted.

This is on top of Underwood's oldest telling her that something was "unreasonable" just a few days ago. Kids really do grow up so fast and seem to cause trouble at the worst moments, don't they?

Of course, people on Twitter were loving every single second of her parenting woes over the weekend.

"Life happens and you just have to roll with it, even in a stinky situation," one follower wrote.

"Getting roasted by a toddler, great way to spend a Sunday if you ask me," one follower replied.

But at least she is taking some time out for herself, too. On Sunday, Underwood posted a post-workout selfie to Instagram where she made a total mom joke and told followers that she was making some time for herself by working out. "May we all get lots of stuff done and make a little time for ourselves in there, too!," Underwood wrote in the caption of the post.

Although her weekend might have left her desperately needing a glass of wine or a couple of extra minutes in the gym, Underwood clearly has parenting under control.