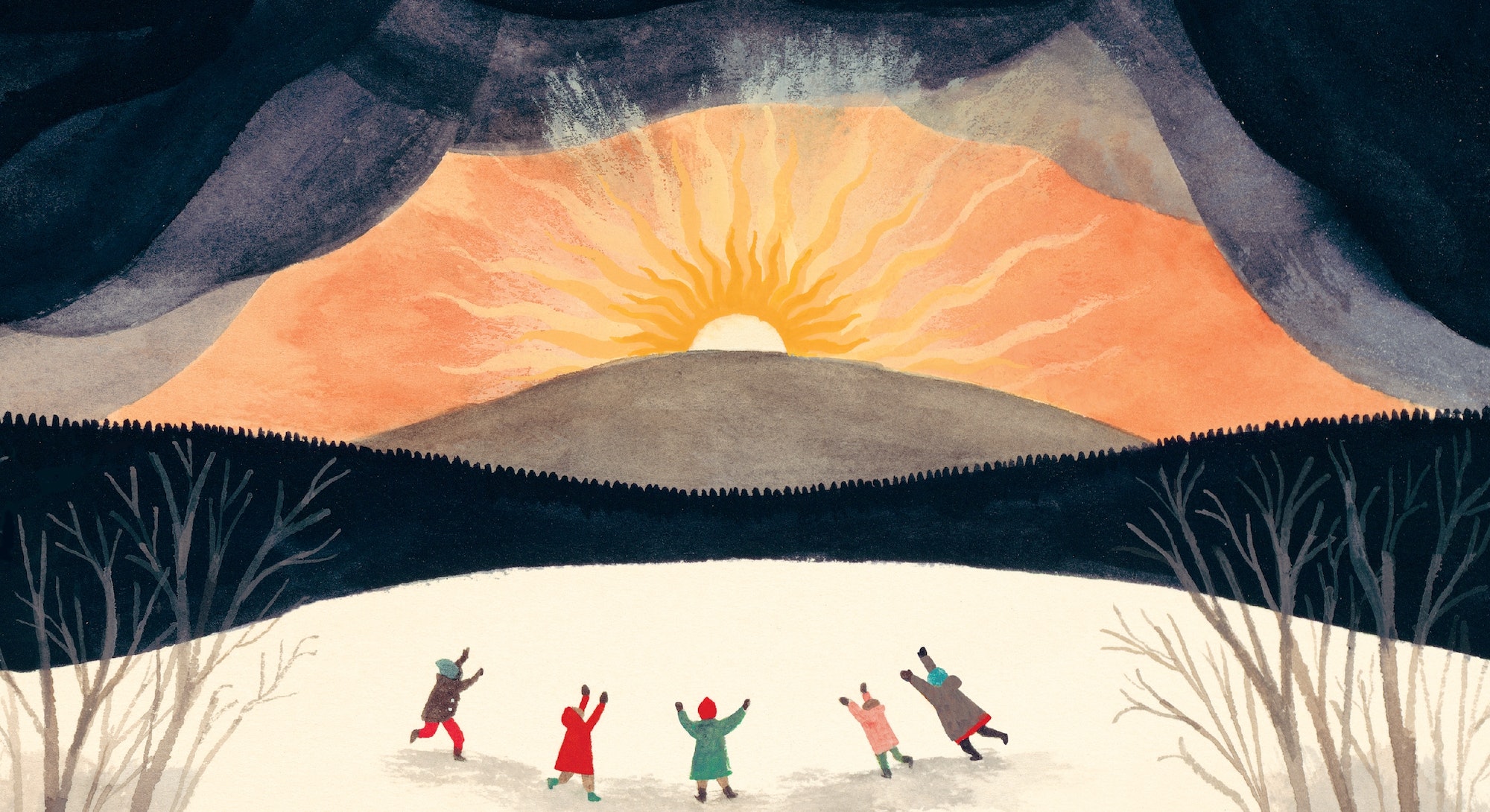 This Children's Illustrator Isn't Afraid Of The Dark

Carson Ellis appreciates witches, but would like to clarify that she is not actually a witch. Just an illustrator who happens to live near the woods with a cat, sheep, pair of goats, pair of llamas, coop of chickens, some children, a musician husband, and an ongoing interest in paganism.

The Caldecott Honor recipient recently published a new children's book, The Shortest Day (Candlewick), in which she created a visual storyscape for Susan Cooper's poem about the winter solstice. Ellis describes it as a "witchy, mysterious approach to talking about the winter holidays in a way that felt like a lot deeper than a lot of the Christmas books that I have seen."

"And everywhere down the centuries / of the snow-white world / Came people singing, dancing / To drive the dark away," goes the narration as the figures come out to celebrate Yule, clutching holly and decorating the trees with candles; a cycle of ritual and rebirth that begins with Ellis' ancestors and brings us up to the age of Elf on the Shelf.

The days are short when Romper speaks to Ellis, and the people of greater Portland are preparing to hole up for the winter. "It's not as inspiring to go outside," Ellis says from her farm. "I think there's also just a lot of glooming up. A lot of seasonal affective disorder." She sees it in her teenaged son, who is self-aware enough to declare "I'm gloomy, and it's the weather," though not her 6-year-old, who is joyful regardless of the sun going into seclusion between October and April.

Kids are "as interested in dark, scary, depressing stuff as adults are," says Ellis, who is married to the lead singer of solstice-inflected band The Decemberists, Colin Meloy.

Ellis' paintings are often referred to as "whimsical" — perhaps our attempt to pin a smile on something more melancholy. "I mean, if people are always calling my work whimsical, I guess it is whimsical," says Ellis. "But I don't feel like a whimsical person at all. I'm kind of like a gloomy curmudgeon."

Her palette is often quite dark, but hints at a deeply expressive and sacred world — bugs are ornately dressed, figures wave reverently at comets, the black of winter is embossed with swirling spirits. Much as Angela Dean finds ghosts everywhere she looks, Ellis finds a spell at work in each landscape. And there is nothing else in kid's literature quite like it right now.

"Carson is like this much older spirit that's riding on ahead of you in the dark with a little light," says Jon Klassen, author and illustrator of the Hat Box trio, and a Caldecott Medal winner. "I think she showed illustrators, myself included, how folk and decorative arts can be used narratively, and that's been a huge reason why the field generally looks the way it does today."

There's something sort of sad about the way it disdains everybody else other than, like, the pure of heart, the child who is so pure of heart.

"Somehow, she is able to make complex characters appear symbolic and simple, and at the same time do the inverse, imbuing a chair or a leaf with rich layers," says Shawn Harris, the illustrator of Her Right Foot and the upcoming children's book Everyone's Awake, a collaboration with Ellis's husband. "Geez, Carson is just the best working picture book maker, in my eyes."

At a time when a certain Disney queen with superpowers is about to hit the big screen once again, Ellis is reconsidering The Chronicles of Narnia and the White Witch. You have to admire the witch's cunning, says Ellis. Meanwhile, Susan, the older sister among the Pevensie kids, is "written out of the book ... as soon as she starts to kind of blossom into a young woman, and care about her appearance." The lesson of Narnia is "once you grow up, you can never go back," she says. "There's something sort of sad about the way it disdains everybody else other than, like, the pure of heart, the child who is so pure of heart."

Her picture books, in contrast, suspend you in the absurd and timeless world of children. ("Woww, decorations!" said my 4-year-old the other day, gazing up at a tree choked in plastic bags.) They rely less on exposition than a feeling; Du Is Tak is written in gibberish, Home interrogates the same idea over and over, and The Shortest Day opens with two spreads of wordless landscape.

"That's kind of like the mystery of poetry," says Ellis. "If you respond to it, if you have such a big initial response to it... you kind of have to roll with it." Open The Shortest Day, and you're back to the beginning of the cycle. Ask me why I loved it so much, and I can only wave a burned stick in its general direction.

I think the weekly in town had asked me to do an illustration and then they paid like $70, which is so insanely nothing.

This Halloween, she dressed as the witch from Monty Python's Holy Grail. ("What else floats?" asks the man about to toss her in a pond and/or burn her at the stake. "Bread!" The villagers shout. "Apples!" "Really small rocks!")

"It's such a good joke because some guys were just like, 'Please, give us a reason to burn a woman,'" says Ellis. "It's a real historical symbol of how terribly women have been treated." But if you subvert the trope and own your witchiness, "it becomes a way of seizing power.

"I'm not a witch at all, but I think witches are cool. I appreciate witches."

Ellis is currently reading Jacob's Ladder by Ludmila Ulitskaya, having polished off The Green Tent. These are "Russian historical novels set mostly during the Soviet era. So they're totally depressing ... but they're super funny in a Russian way," she says. "That's kind of my thing. I like bleak and funny."

To get to the farmhouse in Oregon where Ellis and Meloy live, we must start in Westchester, New York, where Ellis grew up. "It was nice to grow up in the suburbs," she says, but she ultimately wanted more space. She escaped to Missoula to obtain a bachelor's in painting at the University of Montana, and it was there she met her future husband. The pair subsequently moved to Portland to kick off Meloy's musical career. There, she was doing art for The Decemberists, sometimes getting paid in pizza from the parlor where Meloy worked, and earning a crust as a bartender around doing art shows.

At the point she quit bartending to go freelance, she had done only one paying illustration gig. "I think the weekly in town had asked me to do an illustration and then they paid like $70, which is so insanely nothing," she recalls. "Nobody could live off of that in a million years. But at the time I was like, '$70! Somebody paid me $70."

"I was like, 'No, thank you. I got this,'" Ellis told him. "I was very leery of anyone who is going to take any of my money... he must have been like, 'What does this woman think is going to happen? That's she's just going to keep, kind of, muddling along with no agent, no book deal?'" Malk confirms this. "Thankfully, she decided to take a chance on working with me," he says. "I was so taken by Carson's imagination, wide-ranging influences, and technical skill." Years later, he considers her a great friend.

Thus, she began with $70 in the pot, and turned it into a career, subsequently nominated for the Grammys for her album art, and an E.B. White Read Aloud Award, alongside the Caldecott Honor.

Ellis didn't seek out life in the woods. Rather, she and Meloy found an "amazing" school for their son with high-functioning autism, "but it was far away, near a farm." So they moved away from Portland. And then came the llamas.

The image of the illustrator painting in a barn and snuggling with exotic pets isn't quite right. "We're not farmers. I'm not, like, shearing my sheep and taking their wool to market," says Ellis. "I'm just kind of vaguely taking care of them.

"I feel like one in 20 people who are like, 'I've always wanted to live on a farm,' are actually people that would farm," says Ellis, calling me out. "Everybody else just is like, 'I would just pet the animals all day.' And I don't really have time to pet my animals. I'm too busy illustrating stuff."

I do think about moving to a farm, I admit. If I could just magick the competing interests in my life — my kids, my husband, my work, hopefully a llama or two — into a barn big enough to hold it all, everything would be simpler. As a kid, I loved the way children's books took you on a journey, but always landed you back in your bedroom at the end. In adulthood, it always feels like I've unspooled too much rope, strayed too far into the forest to ever find my way back. But patterns emerge. The cycle from short to long days, the hint of a bigger scheme swirling about in the sky, just beyond view.

The funny thing about people who arrived on the planet the year before last or the year before that is they're oblivious to the cyclical nature of life. They don't remember their last birthday. Their current deity is a yellow spatula they have been sleeping with. Christmas could be tomorrow or in five months, they've no real sense. And yet they love The Shortest Day. Somehow, it speaks to them, as well as the mothers out there with their aging bones, watching one year roll into the next.

Picture books are read and loved on one level by parents and on another entirely by children, but Ellis has created a circle from adult to child and back. We are all waving our sticks in appreciation. And therein is the true witchcraft of Carson Ellis.

All images: THE SHORTEST DAY. Illustrations copyright © 2019 by Carson Ellis. Reproduced by permission of the publisher, Candlewick Press, Somerville, MA.