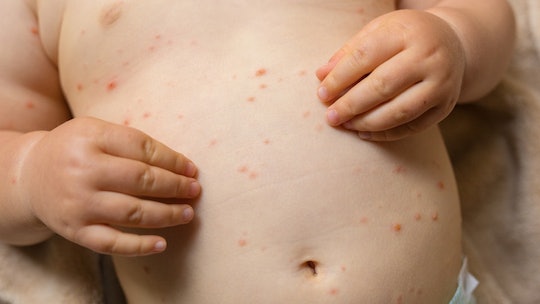 Cases Of Measles In The U.S. Have Already Hit A Troubling High, According To CDC

In what marks a troubling high, a total of 387 individual cases of measles have been confirmed since the start of the year, according to the U.S. Centers for Disease Control and Prevention (CDC), and it's only April. The cases of measles in the United States were confirmed across 15 states and the alarming number is the second highest since measles was eliminated in the United States in 2000. According to CNN, the highest number since elimination was in 2014, with a total of 667 cases at the time.

There are currently six outbreaks — which are defined as three or more cases of measles — in New York State (Rockland County), New York City, Washington, New Jersey, and California (Santa Cruz and Butte County), the CDC noted in its report.

Just last week, Rockland County, New York, announced that it was going to ban unvaccinated children under the age of 18 from entering public places, according to NBC News. Prompting a state of emergency, the county has reported 153 confirmed cases of measles, ABC News reported.

The CDC noted in its report that the current measles outbreaks in these areas have been linked to travelers carrying the disease from countries such as Israel, Ukraine, and the Philippines. And large measles outbreaks are occurring in the countries of origin, according to the CDC and as The Guardian reported in February.

In 2018 alone, the United States experienced a total of 17 outbreaks after 82 people brought measles into the U.S. from outside countries, according to the CDC, which advises getting vaccinated against measles before traveling internationally — and in general to protect yourself and others against this preventable disease.

Health officials strongly recommend getting the measles vaccine as it's very contagious. And it's relatively easy to spread if others aren't vaccinated. According to the CDC’s guide for parents, the virus spreads through the air when an infected individual coughs or sneezes, noting that nine out of 10 individuals around an infected individual have a chance of catching the virus.

Because it's so contagious and it can be prevented, the CDC recommends children receive two doses of the measles vaccine, also called the MMR vaccine, over the course a few years to prevent infection; the first is suggested between ages 12 and 15 months and the second between 4 and 6 years of age.

If you're worried about measles, get in touch with your doctor immediately. Better yet, make sure you and your child get the MMR vaccine early to prevent the infection entirely.