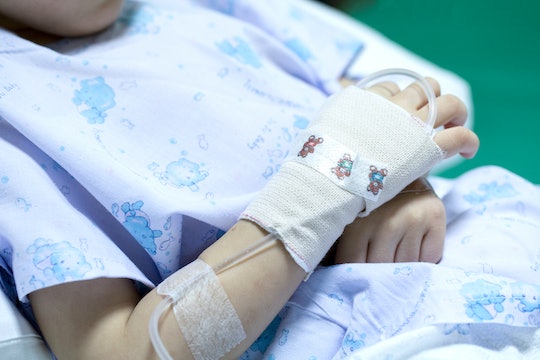 Cases Of AFM, The Polio-Like Illness, Has Hit A Record High, CDC Says

Perhaps the only thing more concerning about the rise of acute flaccid myelitis (AFM), a polio-like illness that primarily affects children, is that there is still so much that isn't actually known about the disease. And now, it seems like 2018 has actually become the worst year on record. According to the Centers for Disease Control and Prevention (CDC), cases of polio-like illness AFM have hit a record high this year, with 158 cases officially confirmed, and another 153 under investigation. That surpasses 2016's previous high of 149 cases, yet even with the medical community working diligently, there still seems to be many more questions than answers.

Though it's still not known what causes AFM, the illness appears to target the nervous system, and seems to first present as a mild respiratory illness, according to The Hill. The effects of AFM can certainly be serious and potentially life-threatening. The CDC has noted that most people with the illness will suddenly develop unexplained weakness in their arms or legs, and can also have issues with drooping facial muscles, difficulty moving their eyes, or difficulty swallowing or talking — and the fact that children are predominantly affected is even more concerning.

But even with the lack of concrete answers, AFM, at least, is still very rare. According to the CDC, even with the increase in cases, the illness is estimated to only affect less than one to two in a million children in the United States will get AFM every year.

In a press call with reporters in November, according to The Hill, the CDC's Dr. Nancy Messonnier, director of National Center for Immunization and Respiratory Diseases, acknowledged the public's concern and frustration, and said: "As a mom, I know what it’s like to be scared for our children and I understand parents want answers."

Yet, she also emphasized that researchers were working hard to learn as much as possible, and though it may not be the kind of reassurance parents are looking for, it does appear that, for now, the worst may at least be behind us.

Even though it's not clear why, researchers have observed that AFM seems to have a "distinct seasonal pattern," according to TIME, with the number of cases spiking every second year since the first recorded outbreak in 2014, and that the bulk of confirmed cases seem to occur between August to October. That pattern helps to explain why 2018 may have been such a bad year, but it also suggests that, for now, the risk is likely low, and that it could remain relatively low until August 2020.

Of course, given the lack of concrete solutions, AFM is still something that should probably be on all parents' radars just in case, and that means that any child exhibiting symptoms of sudden muscle weakness should be get checked out by a doctor immediately. As for prevention strategies, experts seem to have been able to rule out a link between AFM and the actual polio virus at this point (according to the CDC, "all the stool specimens from AFM patients ... tested negative" for the vaccine-preventable illness), though there does appear to be a possible link between AFM and enteroviruses like enterovirus A71, coxsackievirus A16, and West Nile virus.

That means that parents' best approach to keep their kids safe for now will be diligent hand washing, disinfecting toys and surfaces, and avoiding close contact with those who may be ill, as well as taking precautions to avoid mosquito bites. If you live, or are planning to visit, somewhere where West Nile virus may be present, the CDC recommends using mosquito repellent, staying indoors at dusk and dawn when you are most likely to be bit, and removing any standing or stagnant water where mosquitoes can breed.

Although it's definitely unsettling to know that there is still no known cure, treatment, or specific prevention strategy for AFM, particularly in a year where so many confirmed cases occurred, the takeaway for now seems to be that the overall risk is low, and seems to be decreasing. And until experts are able to shed more light on the illness, the best thing we can all do is remain vigilant about symptoms and general illness-prevention techniques in an attempt to keep our children safe.

More Like This
New Study Finds Brains Of Teens Who Lived Through The Pandemic Aged Faster
7 Things Pregnancy Dreams Can Mean If You're Not Pregnant
What To Know About Pregnancy Sex If You Have A Hematoma
Is Cornstarch Good For Diaper Rashes? A Pediatrician Explains