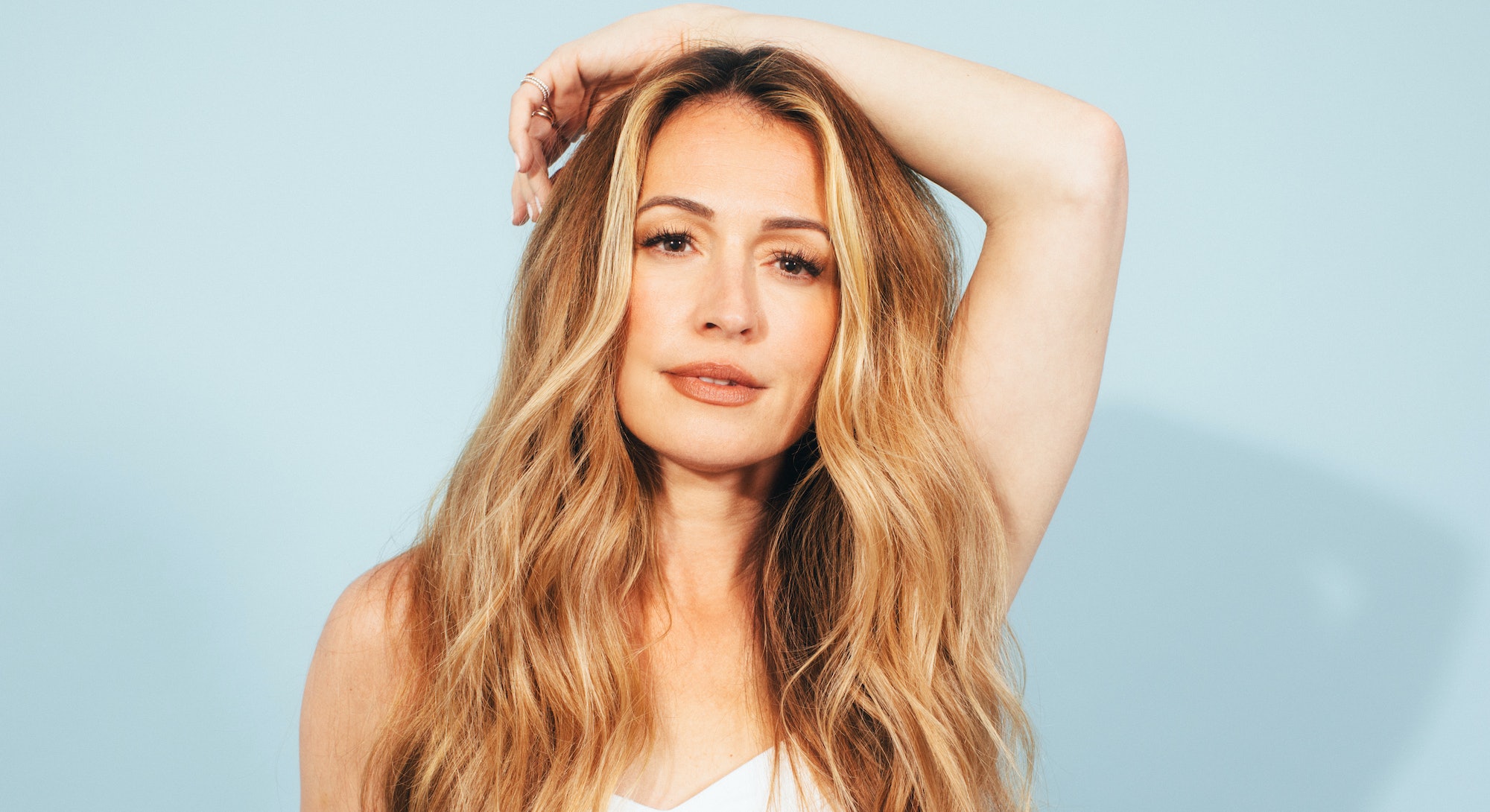 You can dance poorly and Cat Deeley will still love you. The host of Fox's So You Think You Can Dance knows how to find the gold in a person. "If you can be good at interviewing, you're essentially flirting in some way, shape or form," she tells Romper as this reporter braces for impact. "And whether that's with an animal, a child, a man, a woman, it doesn't make any difference."

These days, the British actor, model, and presenter primarily flirts with her two children — Milo, 3, named after the dog in The Mask, and James, 1. She loves babies.

"I think maybe if I'd have started having them younger, I might've had more, I might have ended up with six."

She thinks it through — she'd need a bigger car for six kids, or at some point a bus. "It's very tiring and I'm trying to do the juggle with work as well at the same time, which loads of women struggle with. So I think two is good for right now."

At this time, her Los Angeles home with husband, Northern Irish comedian Patrick Kielty, is full of construction vehicles. Toys. Her eldest, Milo, "naturally gravitates towards diggers and trains, and I don't know where it's come from," says Deeley. "I bought him dolls, too. Like I bought him pink trucks." But the cast of Goodnight, Goodnight Construction Site prevailed. That's how it happens: one day you can't tell a bobcat from a backhoe, and the next you are on a first-name basis with a cast of rollers, diggers, and dump trucks.

In Deeley's house there is "JCB," an excavator, there are diggers, tractors, helicopters, there is excited talk of Digger World. "That's what he loves," she shrugs.

Her digger-fanatic is, she says, an empath like herself.

When Milo was 2, his nursery-school teacher told Deeley that "he really feels if someone's sad or if someone's upset, like he can really feel it," she recalls. "In one way that's amazing because actually that's what you want, is you want kind human beings [who] are lovely to other human beings. But in another way empathy means that you can put yourself into somebody else's skin."

It means her son is feeling everything, sinking his digger bucket into the loamy emotions of everyone around him, if you will. And it makes discipline extra tricky when your child is capable of both understanding what they did wrong, and understanding acutely how that made you feel, in a kind of child-parent Inception.

"When I'm trying to tell him off or do something like that, they're telling me I've got a 2-year-old who can absolutely put himself in my skin. I'm like, that's not easy for me! That's hard."

Her second child is, well, a classic second child: "James is just kind of laid back and cool and just happy to be there." In contrast, "To get Milo to smile you'd have to bring a marching band and elephants. You know, there'd be a whole performance."

Essentially, parenting two children is like hosting two different TV shows on two different channels, with two different live-on-air audience votes if you want to follow this metaphor all the way through.

Deeley grew up in England, started working as a model in her teens, and found her way onto MTV as co-presenter of the show Hitlist UK before scoring gigs hosting children's TV shows, and eventually quiz shows and reality TV programs. She has the somewhat daunting looks of Brigitte Bardot in her hey-day, always looking as though she has tumbled straight out of a Dyson Supersonic and onto Zuma Beach with her long, tousled blonde waves and broad smile, but disarms you with that very British knack for self-deprecation and silliness. There are numerous supercuts of her doing awkward dances as host of So You Think You Can Dance on YouTube, as well as a truly endearing clip titled simply, "Cat Deeley swears on TV."

I don't want to end up with a fully-grown 27-year-old man sleeping in the pool house and playing video games consistently for 24 hours a day.

In person, she is gregarious, hugging everyone on the photo set, thanking a runner profusely for bringing her a crappy machine coffee, and tucking her legs up under her on the strange, low couch we share in a corner of the Romper office to focus her flirtatious energy on The Questions.

If we take the idea of balance as impossible, essentially, how does she *do* family life and work? I ask.

"If I've got to go to work, I never say to Milo, 'Oh, Mommy's got to go to work, I would rather stay here with you.'" She switches to an intense voice: "I'm like, 'Mommy's going to work. She loves going to work and she loves doing her job, and that's how we get ice cream sundaes and all those things.' Because I don't want to end up with a fully-grown 27-year-old man sleeping in the pool house and playing video games consistently for 24 hours a day. You know?"

She'd like her kids to grow up and find something they feel as passionate about as she does egging on hip hop dancers, having a co-star vault over her head, and calming an audience in the moments before the winner is revealed.

It is finding that balance of being a good mom, but also not turning into a lunatic and a shell of your former self, too.

I ask her how she deals with the "moms, look after yourselves — but also your children!" self-care mousetrap.

"[The kids] will always come first no matter what. But I know that I feel better if I do some yoga," she says. "It's about how you can fit it into your life. So I have a yoga teacher who comes around to my house, so when James is napping, I can take the monitor and fit it in."

Her family also takes advantage of the pools and beaches that define my idea, at least, of Los Angeles. It is a long way from the pebbly beaches of Britain.

Her view on living an ocean and a continent away from family has evolved since children. "It's a different thing when you have the kids. Changes," she nods. Her parents (Deeley's mother just turned 70) and her brother — whom she considers her best friend — are back in the U.K. "It's really difficult to be so far from home, particularly when you have children."

In fact, the collective Deeley crew are looking after her children at the moment — would-be babysitters if she lived closer: "You just don't have the backup that you would if you were there."

Before, I'd never felt like anybody was too far away.

Plus, she says, "There is nothing my mother enjoys more than hanging out with the grandkids. So I definitely miss it more now than I did before, because it's not as easy for me to just jump on a plane either, if I suddenly need a fix of back home. Whereas before, I'd never felt like anybody was too far away, because you'd just jump on a flight, have a sleep, and you're back." Now, there is kiddie jet lag.

"They don't know what jet lag is" — the children — "so it brings a whole other heap of problems."

She jokes about the restorative power of a work flight without children, and keeps things sunny, but her point is well taken: life feels a bit more precious after kids. Nothing is taken for granted. Her husband, Patrick, grew up in Northern Ireland during The Troubles, and knows this perhaps better than most. Kielty's father, Jack Kielty, was shot by the Ulster Freedom Fighters, a paramilitary group, in 1988; Patrick spoke about it last year for a BBC documentary.

After the interview, Deeley asks if I get homesick myself — she has slipped back into host mode. Or empath mode, digging politely through my own back story in her gentle way.

Deeley has thought about being based in the UK, and flying over to the U.S. for work, rather than the other way around. "It's all [a] work in progress right now. We honestly don't know."

Something else she misses from home: the National Health Service's midwifery system for new mothers. "They come to your house," she recalls. "I remember just the first few times I found it too traumatizing just making sure the car seat was in properly." She pantomimes the Clipping Of The Seatbelt Straps: "Oh my lord, and it's not clipping properly, how's it clipping?!"

They should have midwives just for car seats, we agree.

In the world of Cat Deeley, whether you're about to take the stage in your tap shoes or are throwing plastic excavators into the bath, life as a parent is "the continuous essential juggle that all women have, where it is finding that balance of being a good mom, but also not turning into a lunatic and a shell of your former self, too."

You know, finding that sweet spot.

"And sometimes coffee and wine help."