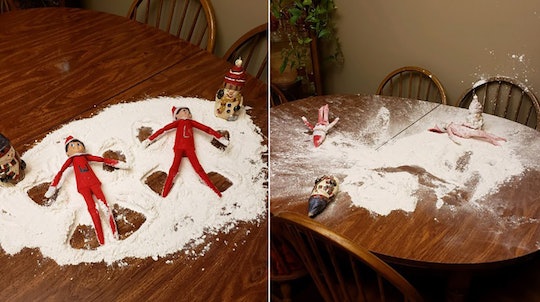 In the latest installment of holiday mishaps, this adorably naughty cat massacred a mom's elaborate Elf on the Shelf display. The scene clearly took time for the mom in question to create, making the outcome that more entertaining. Luckily for us, her daughter uploaded a play-by-play of the ordeal to Twitter.

On Dec. 11, Siarra Swanson took to Twitter to share how her family's 7-month-old kitty, Jett, destroyed an Elf on the Shelf display her mom had set up for her 8-year-old brother. As for the scene? Swanson's mom had two elves making snow angels in flour. She even put snowman figurines in the powder for ambience. But as Swanson noted on Twitter, things didn't go as planned.

"My mom set up my brothers elf on the shelf like they were playing in snow and the last three pictures is what we woke up to instead...," she captioned a shot of exploded powder and discarded elves, a post which has received over 600,000 likes as of Friday. The perp even managed to get powder on the living room wall, sending a clear message to the other elves.

Of course, it didn't take long to locate the paw-fender. Paw prints in the flour tipped Swanson's family off to one likely culprit — Jett. The last photo shows Swanson holding the adorable criminal up by his scruff, and it looks like he has no regrets.

But if you're worried about Jett's punishment (is he on the naughty list forever?) rest assured he get off scot free. "I asked him what he did several times then cuddled him because he’s too cute to stay mad??" she tells Romper via Twitter DMs.

She continued, "I honestly wasn’t surprised he did it. The night before when my mom was setting it up I warned her he would get into it but she insisted on leaving it out."

Swanson also reveals Jett will get a gift this year despite his flour mayhem.

What's more? Swanson tells Romper her mom's hard work wasn't in vain. That's because her little brother assumed the elves had made a big mess, a plot point her mom was happy to back up. All's well that ends well, right?

It's safe to say Jett isn't the first pet who has destroyed an Elf on the Shelf display. In fact, there's an entire thread on Reddit about a parent whose dog ate their kid's elf. "A dear friend from college's elf (for her 6 year old son) got chewed to pieces by their dog last night," the post reads. "Her son found it and didn't want to go to the park today because Jerry (the elf) died." Oops.

In these cases, it seems like the best thing you can do is go with the flow, like Swanson's family did. And to Jett, Meowy Christmas!