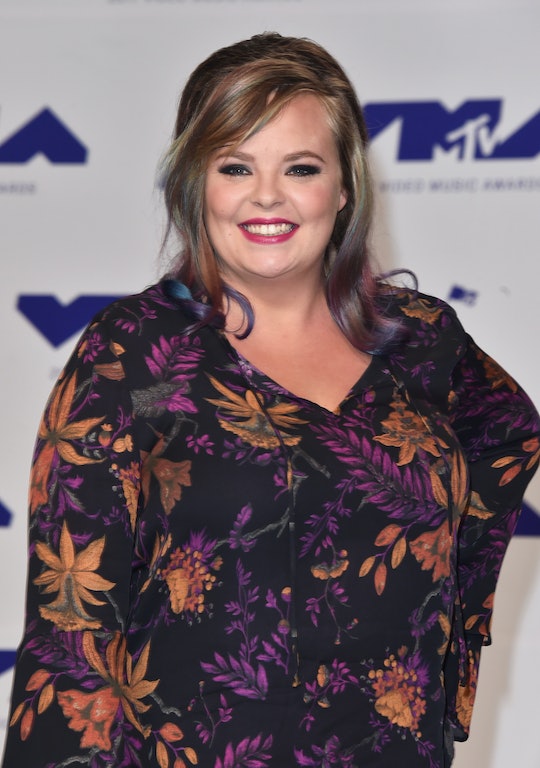 Catelynn Lowell Got Really Honest About Her Mental Health, & It's So Powerful

If you keep up with Teen Mom OG, you probably know that one of its stars, Catelynn Lowell, grapples with mental health issues. In the past few years alone, Lowell entered a treatment facility three separate times to deal with suicidal thoughts, past traumas, and medication concerns. The good news is Lowell completed treatment in late February and she's currently in the process of adjusting to life back at home with her 3-year-old daughter, Nova, and her husband, Tyler Baltierra. Although Lowell's journey is inspiring enough as it is, what's even more admirable is her continued commitment to educating fans and fellow parents on mental health struggles. And if you've ever dealt with a mental health issue or have a loved one who does, there's a good chance you'll want to hear Catelynn Lowell's honest conversation about mental health issues on the podcast Voices for Change 2.0, a project co-hosted by two mental health advocates.

On Sunday, Lowell tweeted a frustrated message about social media. "I'm about to delete ALL social media people are ridiculous," she wrote, according to Twitter. And while Lowell didn't specify what ticked her off, there's a good chance she probably got fed up with her *many* haters. Sadly, it seems that every time Lowell opens up about her mental health issues or stints in treatment, her critics come out of the woodwork to question her parenting and character. From people judging her length of treatment stays (yep, this happens) to some critics suggesting that Lowell is ditching Nova for a "vacation," the hate is real. "Catelynn is really a piece of trash for leaving Tyler to clean up all these messes," one critic wrote on March 14. "... She takes off to “rehab” every time her mood changes. Novalee wants her mom back, and other people in this family actually need the help."

But instead of letting the negativity bring her down, Lowell continues to be outspoken about mental health stigmas and her own personal struggle. And on Sunday, Lowell and Baltierra stopped by Voices for Change 2.0, a podcast led by Rebecca and Joe Lombardo, to discuss the realities of mental illness.

Although there's a lot to dissect in the almost two hours of audio, what stands out is Lowell's desire to remind people that mental health issues are real. This plight is an admirable one because society *still* struggles to validate mental health concerns, despite the fact 1 in 5 adults have a mental health condition, according to Mental Health America. In fact, Lowell has experienced this phenomenon firsthand, which is why she decided to show the highs and lows of her journey on TMOG.

Lowell said of her willingness to open up on camera, according to Voices for Change 2.0:

But for me, if I can save somebody’s life, and show them that it's OK to not be OK sometimes and that there are things you can do to get help, that’s the only reason why I did it. I wanted to bring awareness to mental health issues and that it’s real. Some people think if you’re depressed, well, get the hell of bed. No, that’s not how it works. I really wanted to shine a light on it and that’s why I think I was so vulnerable about it.

Lowell, who refers to herself as a "trauma survivor," hit the nail on the head when she called out people who believe something like depression can be cured by something as silly as "getting out of bed." If it really was that simple, I'm not sure why it's estimated that 350 million people globally worldwide suffer from depression, according to Healthline.

As for why Lowell referenced the getting out of bed line specifically, I'd guess it's because she has heard that piece of "advice" from fans one too many times.

Lowell went on to argue against critics who call her lazy or unmotivated, saying, according to Voices for Change 2.0:

I think that there are a lot of people who are uneducated about it or haven’t witnessed it or just don’t understand it. I really don’t get why people feel like we’re lazy or non-motivated. I wish people would realize that you have an illness, that’s why it’s called mental illness. Our brains are hardwired a certain way for anxiety and trauma… same for depression and bipolar disorder.

Once again, Lowell highlighted the shame countless people face for experiencing the symptoms of mental illness. This type of shaming is especially true for parents who already encounter a ton of pressure to be prefect and active, a situation Lowell knows all too well.

"Stop choosing to be ignorant… you don’t have to be that way in this day and age," Baltierra added to Lowell's statement. "Just do your own research on it. I believe knowledge will create more sympathy and understanding."

And it's true that education is key to battling mental health stigmas. Not only can education create environments in which people with mental health issues are valued and respected, but it can also lead to people getting the help they need.

Lowell, for example, didn't know she had PTSD until very recently. "It surprised me to learn that I was diagnosed with PTSD ... I think a lot of people think that people in the army or marines or soldiers only get PTSD," Lowell shared, according to Voices for Change 2.0. Lowell was able to reach this conclusion because she finally reached out for help, something that she wouldn't have been able to do if she didn't have Baltierra's support and encouragement.

Of course, there will always be people out there who question Lowell's motives (Baltierra mentioned how one person accused her of faking suicidal ideation for a storyline), but one can only hope that this podcast changes some of her critics' opinions. Lowell isn't a bad or lazy mom — in fact, it's quite the opposite. Lowell is working hard to create a more understanding world for her daughter to grow up in, and that's a testament to her inspiring strength.