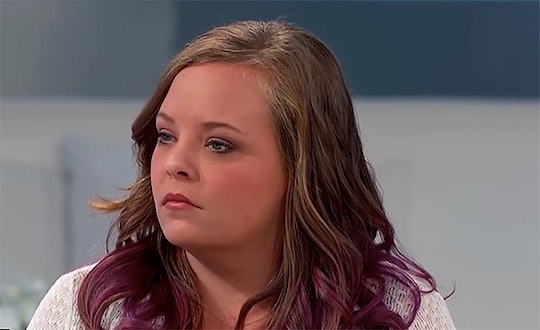 Ever since Teen Mom OG Catelynn Lowell returned from a mental health treatment facility in February, she has had to contend with a lot of criticism. From jabs about her parenting to people commenting about how they feel "sorry" for her husband, Tyler Baltierra, the hate is seemingly never-ending. And late Tuesday night, people started attacking Lowell for choosing to return to inpatient therapy in Arizona instead of opting for outpatient therapy in her native home of Michigan. But don't worry about whether Lowell can handle her critics — girl is an expert in defending herself by now. Case in point: Not only did Catelynn Lowell slam her haters who argued she was "running away" from her issues, but she also managed to turn the controversy into an important discussion about the differences between outpatient and inpatient therapy.

After Lowell suffered a miscarriage in the fall of 2017, she made the brave decision to enter a rehab center in Arizona to receive treatment for suicidal thoughts. And following Lowell's original stint, she decided to return to the same facility two more times before finally returning home to Baltierra and their 3-year-old daughter, Nova, in February. Although many fans praised Lowell for getting the help she needed, others were quick to pass judgement on her actions. Essentially, most of Lowell's haters claim her need for inpatient therapy versus outpatient counseling is an excuse to ditch her family for a "vacation." "What’s wrong with the world is people like Catelynn who lay around milking depression while someone else foots the bill for her little rehab/vacation getaways every other month," one fan wrote.

Sadly, the accusations haven't died down despite the fact that Lowell is doing better than ever. While one would think that people would be praising Lowell for all of her hard work and commitment to being sober, it turns out fans are still harping on her supposedly "running away" from her issues. *Insert face palm here.*

"Does Catelynn not see the cycle of trauma she is continuing for poor Nova?" one person tweeted. "Last nights epi was literally the worst she’s ever looked. She’s not depressed anymore, she’s lazy and running away. Being a parent means putting your kid 1st. She’s never going to get it."

Another person chimed in: "How on earth do u put up with catelynn, she cant keep running away from stuff eventually she has to be there for her child."

"Catelynn shouldn’t be running away to work on her ‘inner child’ while she has a physical child in front of her that should could prevent those issues with," someone else added.

Well, it looks like Lowell finally had enough of all the negative commentary because she took to Twitter on Tuesday night to issue this important clarification: "I wasn't 'running away' from my problems I was FIXING them! Working HARD & getting on the right medication. I wouldn't wish this crap on my worst enemy! But I guess I'll have haters no matter what! Just glad I got myself better and if ppl r mad then be mad I guess #KeepTalkingMH."

Lowell also denied that she refused outpatient therapy, writing: "Wasn't refusing KNEW that I needed more than what I was getting. I was doing outpatient counseling etc. #youonly #knowhalfofit."

Of course, Lowell didn't have to defend herself to her naysayers. But the positive side to Lowell speaking up is that it sparked an enlightening conversation about the different types of treatment for mental health.

Shortly after Lowell issued her statement, she began retweeting many fans who felt compelled to share their own experiences with inpatient and outpatient therapy. "I’ve done outpatient & inpatient treatment and sometimes outpatient just isn’t enough at that certain time," one person explained. "That’s nothing to be ashamed of. dont listen to the hate! I’ll never understand how you guys deal with so much bullsh*t from random people! You’re so strong."

"I also think people don’t understand the difference between inpatient and outpatient," another person added. "The specialists and structure and accountability. I get it. I’m sorry you’re dealing with all this. Sending you love girl. Just love your little girl & husband and YOURSELF!"

And a particularly concerned person pointed out how all this hate might lead to misinformation about mental health concerns. "I just think it’s reckless," someone said about the negative commentary. "Especially with the wide range of age groups that are viewers. So if someone younger is going thru this and is suicidal reading this crap...I’m out of words."

Lowell's supporters bring up a lot of good points, but the one that sticks out the most is that there is no such thing as a "right" treatment plan. It goes without saying that each person has different needs and no one has the right to judge someone else for the type of treatment they seek out. As for Lowell, she chose outpatient therapy because that's the type of intensive care that suited her mental health needs at that time. And if Lowell decides to go back to the treatment center in the future, that's her choice. Judging a person for how they treat their issues, like that one fan aptly pointed out, is a slippery and dangerous slope.

The upside to all of this drama is that it's helping to combat mental health stigmas. Although a lot of people like to poke fun at reality shows like TMOG, it's clear that this series has the ability to influence lives in a positive way. And Lowell's inspiring story is a perfect example of that.