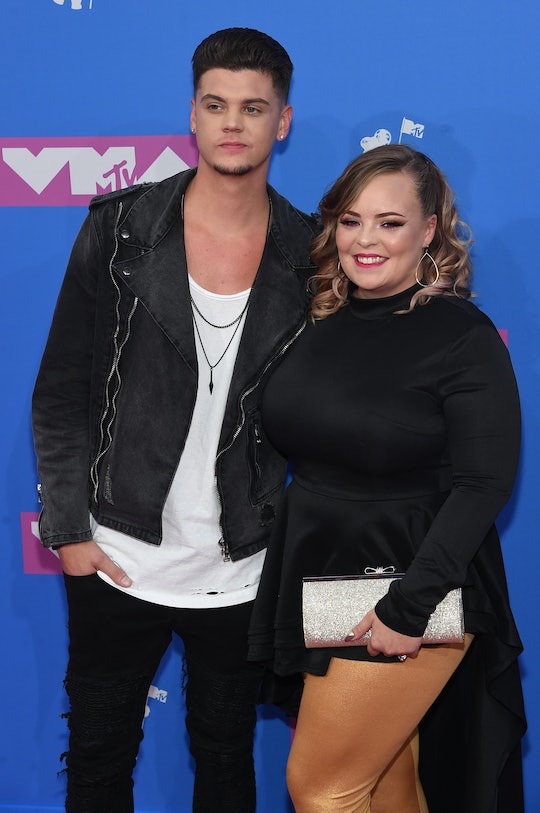 Since inviting viewers into her life a decade ago as she placed her first baby up for adoption, Teen Mom OG's Catelynn Lowell has grown up a ton. She married her middle school sweetheart Tyler Baltierra (after many relatable stops and starts), and they welcomed their third daughter, Vaeda, this past February. On the Jul. 29 episode of Teen Mom OG, Catelynn Lowell stops breastfeeding, and, anticipating backlash, Tyler posted the clip on Twitter ahead of time with a message of support for his wife.

"Vaeda is the happiest, healthiest little baby I have ever seen!" he wrote. "So, a little advice to all of you 'Pinterest Perfect Parents', If that baby didn’t develop in your uterus, you don’t have a right to say what’s best for that baby. PERIOD."

The "Pinterest perfect" comment references a moment in the clip when Catelynn bemoans the deluge of social media content romanticizing breastfeeding, when the reality is often far more gruesome. Catelynn explains while soothing Vaeda's hiccups on the couch:

Oh my gosh, it's hard. People always post the wonderful things about breastfeeding, which — it is wonderful — but like, the pretty pictures and all that stuff... they don't mention that you have a kid stuck to you for 24 hours, or for an hour at a time, or that you’re afraid they’re not getting enough, or how they want to eat 60 times a day, or about the bleeding nipples.

For his part, Tyler remains the paragon of support, listening to and validating Catelynn the whole time.

"And then nursing, too, it's hard for me to even schedule even my own therapy," Catelynn continues, outlining how sometimes childcare can impede her own self-care. "Because I'm like, OK, it's an hour and a half there. I could take her with me and nurse when I'm there? Or I could...? [It's the] feeling that you can't go anywhere."

Tyler comments that he's never thought about it that way and affirms that it isn't something he hears people talking about when they discuss the merits of breastfeeding.

"It's hard," she sighs. "The realness of it is that breastfeeding is hard and it's not meant for everybody."

While Catelynn feels good about being able to breastfeed Vaeda when she was producing colostrum, she understandably worries that, as reality TV parent, she'll be a target of shame and judgment. Indeed, about a week after Vaeda was born, Catelynn made an Instagram post writing that nursing was "the best feeling in the world." In addition to the guilt she feels from outside pressure to breastfeed, there's probably some grief mixed in with having to give up that amazing feeling for her own sake. Prioritizing your own bodily autonomy in the face of raising an infant unfortunately continues to be stigmatized, and Catelynn voices concern that she'll be seen as making a selfish choice.

"I think selfish is that wrong word," Tyler helpfully interjects. "I think it's maintenance, like, I'm doing this so I can keep up the maintenance of my mental health and so I'm not draining myself dry."

Ultimately, it's a pretty remarkable conversation for young parents to be having on television and Catelynn and Tyler set a great example for how to have it supportively. You can see more from them when Teen Mom OG airs Monday nights on MTV.