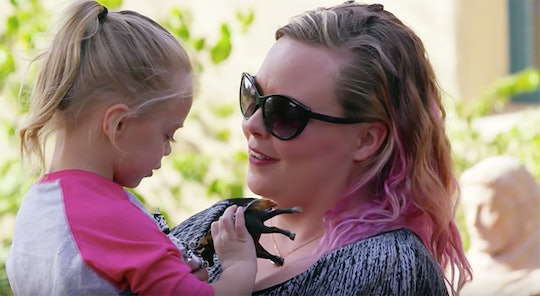 Catelynn & Tyler Baltierra’s Daughter Nova Got Bangs & OMG, She Looks SO Grown Up

In the midst of back-to-school season, Catelynn and Tyler Baltierra's daughter Nova got her first "real" haircut. Catelynn documented the sweet moment to Instagram, showing off Nova's cute look aka her new bangs. Not only do fans love the style, but many can't get over how grown up the sweet girl looks.

The Baltierra family is doing great these days, as the Teen Mom OG stars welcomed their third daughter, Vaeda Luma, into the world in February. Vaeda is a rainbow baby, and she was delivered following a period of strife between Catelynn and Tyler.

But the couple, who tied the knot in 2015 and put their first daughter, Carly, up for adoption in 2009, are doing better than ever. And while they dealt with fake divorce rumors in the past, all of the work they've put into their relationship has paid off.

Now that the family is on solid ground once again, they're enjoying the small things in life, like Nova's adorable haircut. "My baby’s first real haircut," Catelynn captioned a cute video of Nova in a salon chair, shared to Instagram Monday. The proud mom then showed off the final look, writing: "Guys! Omg. She’s SO cute and BIG!"

For fans who've watched Nova grow up (the show has been for years now), this picture might make them feel a tad old. How and when did the little reality star get so big? Time flies, that's for sure.

Of course, fans loved the look.

"Love the bangs!" one person commented. "Girls with bangs are extra cute."

Someone else said: "Omg I just died. She’s the cutest thing in the whole wide world!!"

"She’s not supposed to grow up!!" a fan lamented.

But Nova isn't the only one who is growing up quickly in the Baltierra household. Little Vaeda is already 5 months, and is growing up in the blink of the eye. And some fans might notice a striking resemblance between Vaeda and Nova, a sentiment that isn't lost on Catelynn.

As for the pair's personalities? The two couldn't be more different. The mom continued, "But their personalities, you can already tell a difference. Ever since I can remember, Nova was always kicking her legs constantly and always moving. Very loud. Vadea is super chill and smiley. Maybe she will have my personality, because Nova is Tyler to the fullest. Nova is just like her dad."

Despite the pair's differences, they love each other deeply. Just ask Tyler, who shared the sweetest video of Nova signing "London Bells Are Ringing" to Vaeda shortly after her birth.

It's important for Catelynn and Tyler to treasure these moments because it's clear their little girls are growing up so fast.