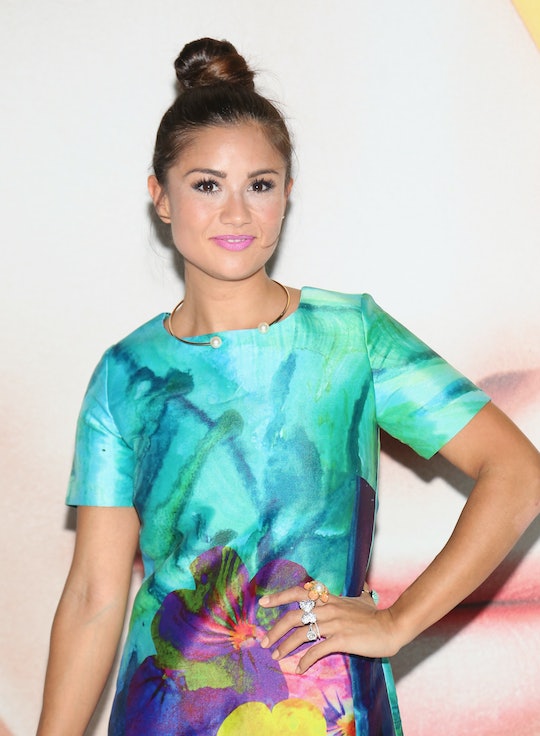 Catherine & Sean Lowe Celebrate Christmas Early With The Arrival Of Baby No. 3

They're one of the few couples who met the good, old-fashioned way: on The Bachelor, before there was the Bachelor in Paradise spin-off. Then, after breaking the mold of breakups post-show, the couple married and lived happily ever after with two sons. Now, with husband Sean Lowe by her side, Catherine Giudici Lowe has given birth to her third chid.

On Monday, Dec. 23, the couple welcomed — drumroll please — a baby girl! The announcement was so sweet, with Giudici and Lowe both taking to Instagram share the happy news. "Mama, Mia," the proud new mom of three captioned a shot of herself basking in some skin-to-skin time with her newborn from her hospital bed. Meanwhile, the delighted dad shared a photo of himself holding his swaddled baby girl, writing, "I’ve always wanted a daddy’s girl and now I’ve got her. Mia is healthy, Mama is doing great, and God is so good!"

Another Instagram follower declared, "I just told my sister and we both screamed we’re so happy for y’all."

Yet another person chimed in with, "Girl you posted 10hrs ago!!?? You mean you pushed that lil muffin out in less than that!!? SUPER WOMAN I TELL YOU. congratulations on a new princess!" (It's worth noting, though, that Catherine delivered via a scheduled C-section, per her reply in the comments.)

The proud daddy also shared a post including a video of himself announcing, "It's a girl!" to his other two children and family members in the waiting room. Also in the Instagram update was a clip of an excited big brother revealing his baby sister's name, along with a couple of other photos from the hospital. "Yesterday was a really good day," Sean captioned the post.

Giudici, 33, told People magazine back in June that while she wasn't going to find out the sex of her third baby ahead of time even though she was pulling for a girl. “I definitely am praying very hard for a girl," she told the publication. "I’m trying to think girl thoughts...[but] that’s why we don’t want to find out. I’m going to love this baby no matter what. I’m going to find out when I meet it and love that baby.”

The adorable pair, who were engaged in what might have been the popular TV series' most romantic rose ceremony literally ever, were married in 2014 in the first live-for-TV Bachelor wedding, Us Weekly detailed. As with their approximate 10-month engagement (per Us), this couple thereafter worked just as fast on having kids, welcoming Samuel Thomas, now 3, and then Isaiah Hendrix, now 1 1/2.

“[With] both boys, I had no symptoms — just a little bit tired, but no nausea. Now I definitely have more nausea. It’s something that I can tell. I’m hoping [having a girl is] what it means,” the reality star noted to People at the time of the big baby announcement. “I’m very tired, but that could be because I have a toddler and an infant too!” she joked.

The couple, who talked to OK! magazine about the secret to their success, noted that they may be the rare Bachelor success story. "A lot of people can fall in love in this fairy-tale setting, but when you get back to real life you're like, 'Oh, crap, we live in different cities, we're going to have to compromise and make some big, life-altering decisions,'" Lowe told the magazine.

For now, though, the couple is surely reveling in the sweetness of having a young and beautiful family all their own. “The cuddles are just so wonderful," Giudici told People.

"I adore baby carrying, just having them on me all the time. The newborn phase doesn’t daunt me at all but it’s going to be different having a toddler and a baby and a newborn...I don’t know what that is going to be like, but it’s not scary because we know what to expect with the newborn phase...I’m sure I’ll have some breakdowns, but that’s expected. And I give myself grace on that all the time.”

So a big congratulations to the Giudici-Lowe family on the new baby's arrival. This clearly sounds like a family that can take a third addition, and this mama is meant for a bigger brood of kids (she shared with OK! that she might want four total). So stay tuned!

More Like This
Sarah Levy Reveals Birth Of Her Baby Boy & His Name Is A Sweet Tribute To Her Dad
You’ve Probably Been Pronouncing “Lilibet” All Wrong
Patrick Mahomes & Brittany Matthews Reveal They're Expecting A Baby Boy In Sweet Video
Catherine Reitman Calls It Like She Sees It: “Being A Working Mother Is Impossible”