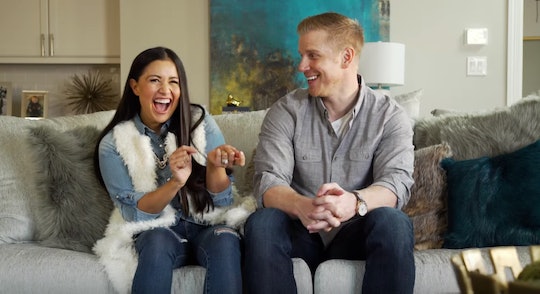 For National Honesty Day, Bachelor star Catherine Giudici Lowe decided to get super honest with her fans, giving them a glimpse at the... less glamorous moments in her life. In a candid Instagram post on Sunday, a make-up-free, pajama-wearing Giudici sniffed her son's diaper before looking up doubtfully. It's a pose most parents can relate to, even if it's not one that's frequently shared on social media.

"I usually post pictures on the days I wear makeup and clothes that are worth documenting, but 99% of the time I look like this," Giudici captioned the Boomerang video, which was an ad for Honest Tea's #RefreshinglyHonest series. "Happy National Honesty Day!"

Other moms joined in on the fun on Honest Tea's Instagram page, where they shared their worries about being selfish, too lax when it comes to sugar and electronics time for their kids, or not nailing the whole motherhood thing 24 hours a day, seven days a week. Giudici's contribution was spot-on, hilarious, and way too relatable.

Giudici gave birth to her son, Samuel Thomas, in July 2016, according to E! News. Giudici and her husband, Sean Lowe, originally met on season 17 of The Bachelor in 2013 and got married a year later in a televised ceremony. (Hey, those Bachelor success stories don't come around all that often, so when a Bachelor match gets married, it's definitely got to be on TV.)

Giudici may already have her hands full running her LoweCo card business and checking in on baby Sam's diaper, but she and Lowe are hoping to add another baby to their family soon. "I’m not pregnant or anything, but it’s definitely important that we knock it out!" Giudici told Entertainment Tonight in November. She continued:

My sisters and I are really close in age, and that’s something that I loved … experiencing a lot of the same things. So we’re hoping that the next one just gets to be best friends with Samuel. … [I’ll probably get pregnant] early next year, in the next 6 to 8 months.

Regardless of how busy parenting gets, Giudici has managed to continue injecting plenty of her signature humor into motherhood. On social media, she's posted several shots of Samuel winking (appropriately captioned "MACKDADDY"), videos where she alternately flashes an "I have no idea what I'm doing" t-shirt and her baby, and pictures of her creeping on baby Samuel.

Thanks for the honesty, Giudici! Here's to hoping she keeps that relatable motherhood humor coming.