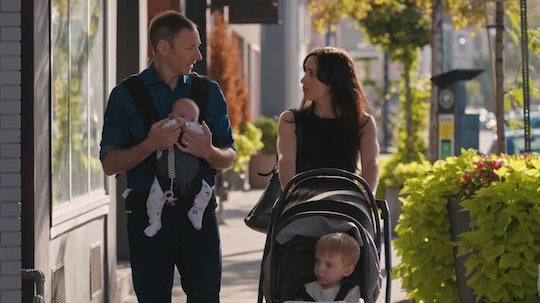 The beauty of Workin' Moms, which flashed its good-natured bosom onto U.S. screens for the first time last year, is that right when things get hard for its moms, another season arrives to crank things up even more, such that you long for the simple days of pumping milk in front of a leery boss back when you only had one child to put in daycare. Season 4 is hitting Netflix today, bumped up the schedule to offer respite for the millions of moms currently realizing what hard really looks like. "Since we've all been trapped at home, it's been a huge lesson in compassion for me in mothers who do this around the clock," says Catherine Reitman, star, creator, and show runner. "We're all getting sort of a front row seat to what it must be like to be around our kid, you know, all through the day."

The new season opens where the last left off, presenting Kate (Reitman) with a tantalizing choice between her husband Nathan (cheater), and Mike, very alpha PR man, waiting somewhere exotic with a cocktail for her answer. The fantasy of escape is a balm for May 2020 eyeballs, though Workin' Moms fans will know that it is never quite that easy — once you become a mom, you're forever changed. Even when your children are grown, the writers show in a late fever-dream, you'll find ways to worry you've messed something up.

"I still worry that I'm not enough," says Reitman. "Don't get me wrong, I love the fuck out of my kids, but I definitely find myself constantly being like am I selfish?" She is a working mom herself in the sense that she began filming Season 1 of Workin' Moms when her second child was 5 weeks old (you can find her children scattered through the seasons, and her real-life husband Philip Sternberg plays onscreen husband Nathan). She comes from a family of directors and actors (her brother is Jason Reitman, her father is Canadian film director Ivan Reitman, and her mother is an actress), and the show itself was borne out of her queasy adaptation to motherhood.

"When my first guy came out," explains Reitman, "I had this huge identity crisis. I, you know, later sort of discovered I had postpartum depression." As time has gone on, and the show's success has ballooned (CBC green lit the show, which was later snapped up by Netflix), "I've grown more confidence that I have what it takes to keep working."

'Good luck catching up,' she pictures herself telling the teacher, 'we did a couple of sheets over the last five months.'

Small kids, small problems, goes the adage, and Season 4 offers a glimpse into its truth: while one mother worries her baby looks like Mickey Rourke, Anne's (Dani Kind) relationship with her evil teenage daughter offers no easy answers, though Anne is trying her damndest to sell them. Season 4 has already aired in Canada, because there is no measure on which Canada is not more attractive than the U.S. at this moment, and Reitman is already at work on the next, a fact that is great and terrible. "I'm running the Season 5 writers room right now out of my house," she says, "and my kids [are] going for the door every other minute."

Reitman tips her hat to other mothers, and to teachers. She feels bad about how fall will look, when the results of our undisciplined homeschooling are revealed in full. "Good luck catching up," she pictures herself telling the teacher, "we did a couple of sheets over the last five months."

Reitman is trying to homeschool her 4- and 6-year-olds and write Season 5 while "trying to keep the marriage alive, trying to keep parents alive," and throwing "what I'm calling the world's worst birthday party" for her younger son.

Her kids attend public school in Los Angeles, in classes of 20. "It must be like herding cats," she jokes. Her older son had to learn how to read a clock recently for school. "I'm like how do you read a clock? You're going to have a phone, it's going to be fine."

Reitman says she is "failing left and right," as are all her friends. "Thank god they all feel the exact same way," she says, "otherwise this would be, I mean it is so isolating."

As in motherhood, it can be isolating even when everyone around you is going through the same thing. Reitman is trying to homeschool her 4- and 6-year-olds and write Season 5 while "trying to keep the marriage alive, trying to keep parents alive," and throwing "what I'm calling the world's worst birthday party" for her younger son.

Still, as you follow Kate, Anne, Frankie, and the wider cast into the show's fourth season, it's hard not to feel a little nostalgic for the great mess that is each chapter of their lives.

Looking back, "my kids are sort of buried in each season so I can see them and go, oh my god, that's what they looked like," says Reitman. "That's what I was leaving every day to make the show."

Season 4 of Workin' Moms is now streaming on Netflix.