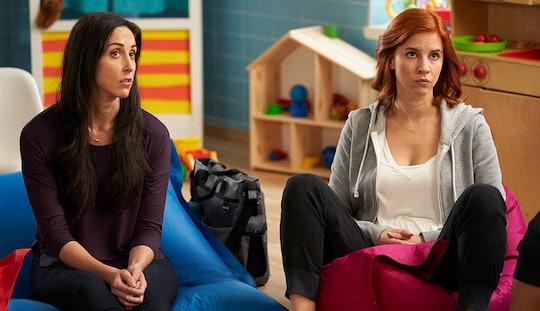 Lets be frank: motherhood on television is rarely portrayed in a realistic fashion. Sure, there's the occasional hectic mom trying to scramble everything together, but at the end of the day there's always a happy ending. Unfortunately, that's not just real life — but Workin' Moms, created by and starring Catherine Reitman, is here to change that. Reitman recently stopped by Romper's office in New York City to chat about the series, which hits Netflix on Friday, Feb. 22, and she was just as honest as the show's portrayal of being a working mom in 2019. In fact, Reitman shared that Workin' Moms was inspired by a mommy and me group gone wrong — and her own real life postpartum depression.

"The first time I got pregnant and had a baby, this was five years ago, and I had brutal postpartum depression," Reitman shared with several editors from Romper and the rest of Bustle Digital Group during an intimate Q&A in our office on Feb. 20. "Like it kept making me laugh, like I would be driving down the road and I would fantasize about a car hitting me and just taking me away from all this and put me in the hospital for seven to ten days. And it felt like a vacation."

Once Reitman decided to open up about what was happening inside her head after having a baby, she found that there weren't a lot of people willing to listen. As Reitman explained, "When I told my mommy and me group in my real life, they kind of changed the subject, like very quickly." Even worse? One of the moms in the group later suggested that it might not be "the right fit" for Reitman.

"I was like, f--k. We're not allowed to be transparent about how difficult this is," Reitman continued, revealing the sad truth that many moms dealing with postpartum are often subjected to believe. Reitman added that she stopped sharing her thoughts "because I thought it was tragic and sad and scary." But, she admits, as dark as her thoughts were at the time, they kept making her laugh.

Eventually, Reitman's postpartum turned from a negative to a positive by inspiring Workin' Moms — which is now in its third season on Canada's CBC. "The point of the show initially was to show the lighter side of the darkness that so many women feel when they become mothers," Reitman shared. "I shot an eight minute sizzle just with friends and borrowed equipment. And I brought that to Sally [Catto, Programming Manager at CBC], and based on that she green lit the series."

Three years later, Workin' Moms is ready for an entirely new audience thanks to Netflix: the rest of the world. The series, which could definitely be considered a black comedy, addresses several different topics that, unfortunately, society is still struggling to normalize. For example, postpartum is at the forefront with Frankie, a lesbian mom and real estate agent who can't seem to shake the dark cloud hovering over her at all times. Then there are Kate and Jenny, both of whom are forced to pump breastmilk at work in less than ideal conditions — like a public bathroom toilet stall, for one. Lastly there's Anne, who on the outside seems to have it all but is struggling with a third unexpected pregnancy while her second child is still just under a year old.

While the four main characters are all their own people on the show, Reitman shared with Romper that she very much considers them to be four different variations of her own personality.

Here's how Reitman explained it: "They're all based off of me, really. Kate sort of felt like my painfully ambitious and inability to make a compromise, and plus my anger. Jenny was my vanity. And Frankie was sort of my depression, my lost child. So they all felt like different elements that we fleshed out in the writer's room into fuller characters."

As Workin' Moms continues to break the mold for how women and mothers are portrayed on television — as "three-dimensional flawed women" — Netflix will roll out all three first seasons before the end of 2019. My one warning to those of you planning to watch? Prepare to be absolutely and totally obsessed.

More Like This
10 Parenting Lessons From Abbott Elementary That You'll Want To Write Down
Kim Kardashian Stars In Hilarious House Of The Dragon Parody, The Targashians
Lifelong Teacher Dr. Jill Biden Loves Watching Abbott Elementary Too
Goldie Hawn & Kurt Russell Got Royally Dressed Up For Their Granddaughter's 4th Birthday Party