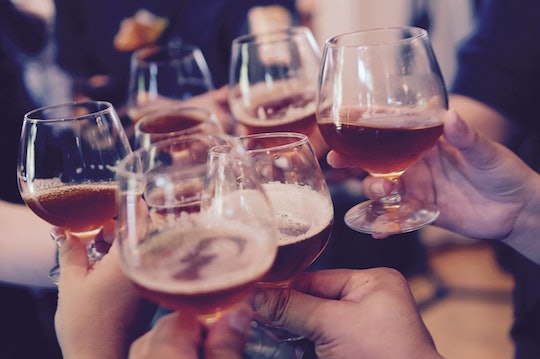 On Tuesday, the Centers for Disease Control and Prevention issued a new warning for women who are trying to become pregnant, or could become pregnant: i.e. all women of “childbearing age should avoid alcohol unless they're using [birth control or other forms of] contraception,” according to USA Today. The suggestion was made in an effort to reduce the number of babies born with fetal alcohol syndrome because, according to the CDC, 3.3 million women between the ages 15 and 44 are at risk of exposing a developing fetus to alcohol because they drink, they are sexually active, and they are not using birth control. But the suggestions are sexist, they ignore the fact that birth control isn't free, and they guilt expectant mothers about their decisions and their doctor's recommendations.

Anne Schuchat, principal deputy director of the Centers for Disease Control and Prevention, explained that alcohol can harm a developing fetus at any stage of pregnancy, according to the CDC's announcement:

Alcohol can permanently harm a developing baby before a woman knows she is pregnant...about half of all pregnancies in the United States are unplanned, and even if planned, most women won’t know they are pregnant for the first month or so, when they might still be drinking.

The risk is real. Why take the chance?

And while this initiative is great, it is not without its flaws. Here are three things the CDC's recommendation is missing.

While many forms of birth control are covered by insurance and Obamacare, that does not mean birth control is free (a common misconception). In 2012 Planned Parenthood told U.S. News and World Report that birth control pills cost anywhere from $15 to $50 a month, depending on health-insurance coverage and type of pill, and the patch is comparable, costing anywhere from $160 to $600 annually. While this may not seem like a huge expense, it is for many in this age range — especially those who are younger, still in school, and/or unemployed.

Birth Control Isn’t The Sole Responsibility Of Women (“The Woman”)

I’m going to sound like my mom now, but I’m I’m going to say it anyway: It takes “two to tango,” and it takes two to make a freakin’ baby. Two! Yes, women are the ones who carry children, but that does not mean they are the only ones who bear responsibility when it comes to birth control and safe sex. Men can wear condoms and both parties can opt to explore each other in sexually gratifying — but non-penetrative — ways.

Expectant Mom’s Face Enough Guilt, Let’s Not Put This On Them Too

When I found out I was pregnant, I was thrilled. I was also an emotional wreck, and I was completely and utterly terrified. What would motherhood look like? Was I ready? Were my husband and I ready? What should I do to keep myself and my baby safe? What foods could I eat? What foods should I eat? But I was also horrified. You see, when I got that positive result, I knew I had been consuming alcohol. I knew in the days, and weeks, before I found out I was pregnant, beer had passed through my lips — as had sushi, and other “forbidden” things. I went to my first OB-GYN with bated breath, and I didn’t exhale until I heard a heartbeat.

When I did I relaxed, a bit, I told my doctor everything. I told him about the beers I had during Hurricane Sandy, the drinks I had consumed while on a cruise (where my daughter was conceived), and I told him about all the strange and raw foods I had eaten. I asked if she (then “the bean”) was OK. I asked if I had hurt her. Was there any chance I had hurt her? He chuckled, and smiled and said no. I was barely five weeks weeks pregnant (and I found out 8 days earlier). She would be OK. Everything was OK.

Here’s the thing: I understand that drinking during pregnancy is a “no-no.” (Most women do.) But telling all women of childbearing age to avoid alcohol unless they are on birth control is extreme, as it puts more guilt on already worried moms-to-be. Moms who, I assure you, do not need the CDC to tell them this, because they are already thinking it. (Newsflash: women are not “stupid.”) Does that mean some women may not need help kicking drugs or alcohol or cigarettes when they conceive? No. Absolutely not. And that support should be made available, but telling all women they should stop drinking because they could conceive is a bit too far, and it presumes that all women have the same access to contraceptives and that all women bear the sole responsibility of preventing pregnancy — both of those assumptions are entirely false.