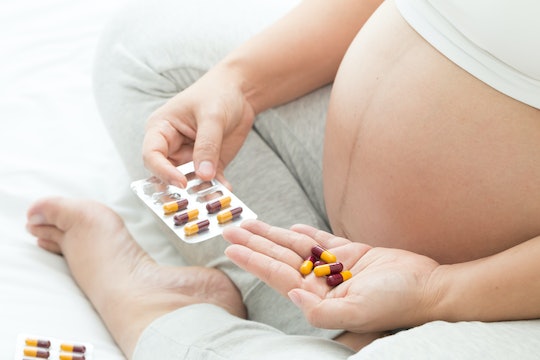 CDC: Some Common UTI Medications Taken While Pregnant May Be Linked To Birth Defects

There are so many things that women are told to do and not to do during pregnancy. And, for many things, it's for good reason, because certain foods, diet, or medications could run the risk of harming the fetus. Although illness, while frustrating, can be common during pregnancy, it can usually be easily treated with a trip to the doctor. Although now, some common antibiotics prescribed during pregnancy to treat urinary tract infections may be linked to birth defects, according to the U.S. Centers for Disease Control and Prevention (CDC).

UTIs can be a pretty painful experience when you're not pregnant — and when you are pregnant, the infection is just another nuisance among many others that you have to deal with. As with most infections, a doctor's appointment and a prescribed antibiotic can clear it up within a few days, according to the Mayo Clinic. UTIs are the most common infections in people, according to the CDC, and about one in 10 pregnant women are diagnosed with a UTI just before or during pregnancy.

Now, though, a new report from the CDC has found that antibiotics used to treat this common infection could potentially be dangerous to the fetus. These antibiotics include nitrofurantoin (commonly known as Macrobid, Furadantin, and Macrodantin) and trimethroprim-sulfamethoxazole (commonly known as Bactrim, Sulfatrim, and Bactrim DS) and the CDC is now recommending that women avoid these antibiotics in early pregnancy if possible, due to a potential risk of birth defects.

These medications have only been linked to "a small risk for birth defects," according to CBS News, but women obviously want to do what is best for their growing baby. According to the news outlet, there is a "3 percent risk of birth defects associated with all pregnancies" and taking these antibiotics increases this risk "about two-times" as much. Therefore, it is important for some women to know the risk involved with anything they are putting inside of their bodies at any point in their pregnancy.

By taking these two specific types of antibiotics, Elizabeth Ailes — a health scientist at the CDC and lead author of the report — told CBS News a fetus could be at risk of "heart, brain, and facial defects." The study's initial report indicated that these defects can specifically include anencephaly, or a birth defect where the baby is born without part of the brain or skull, general heart defects, and orafacial clefts, or a cleft lip and clef palate.

While the increased risk with these medications is small, according to CBS News, the risk of an untreated UTI while pregnant can have far worse consequences than those associated with these antibiotics. As Ailes explained to CBS News, "It's important for women to know, despite the small elevation in birth defects risk, treatment is really important because untreated UTIs can have serious consequences for both the mom and the baby."

If pregnant women do not receive the proper treatment for the infection, it could lead to a kidney infection, which has been proven to cause early labor and low birth weight, according to the Mayo Clinic.

Because the risk of not treating a UTI outweighs the small risks involved treating it, doctors still might prescribe these medications to their patients. This report, according to the CDC, should only serve as a reminder to doctors that they are "treating for two" when they are prescribing antibiotics to a pregnant woman and that there is always a risk that can be passed on to the baby.

So what should pregnant women do with this information? Expectant moms should be aware of the implications of antibiotics during their pregnancy, and according to ABC News, they should have a conversation with their doctor about the risks involved with every medication they're prescribed, trust a medical professional with such concerns, and always speak with their doctor before stopping or starting any treatment plan.

Still, as the saying goes: "knowledge is power." And women who are aware of the risks involved with taking certain antibiotics while pregnant can only help them be more in control of their treatments.

More Like This
Are You Leaking Amniotic Fluid Or Is It Normal Discharge? Experts Explain
Here's How To Keep Your C-Section Incision Dry
New Report Shows 80% Of Pregnancy-Related Deaths Are Preventable
How To Increase Your Sex Drive While Pregnant