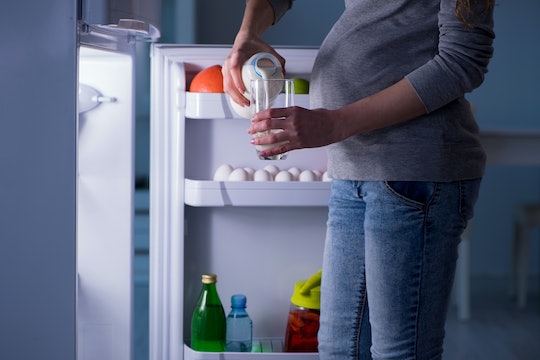 It's safe to say that superfoods are a cornerstone of the modern health-conscious diet. Many people chasing a clean, organic lifestyle will stuff their meal plans with the latest food fad, from pomegranate couscous to avocado on everything. Some health-conscious foodies have also started drinking raw milk, believing it has more nutrients and probiotics than homogenized milk. But it seems unpasteurized milk may not be the superfood people believe; recently, the U.S. Centers for Disease Control and Prevention issued a warning that urges pregnant women who drink Udder Milk, a New York-based raw milk brand, to see their doctors immediately. (Romper reached out to Udder Milk for comment but has yet to hear back.)

The CDC issued its warning on Nov. 21, informing moms-to-be and anyone else who consumed Udder Milk products within the last six months to visit their doctors in order to test for Brucella abortus RB51 (B. abortus), a rare and potentially fatal bacterium that can cause miscarriage, according to International Business Times. The warning comes two months after a New Jersey woman was found to be infected with Brucella abortus RB51 after drinking unpasteurized, raw milk from Udder Milk. The CDC alert applies to New York, New Jersey, Connecticut, and Rhode Island residents, IBT reported.

Brucella abortus RB51 is a multi-drug resistant strain of the Brucella bacteria that can cause abortions in cattle, according to the Center for Food Security and Public Health at Iowa State University. B. abortus is also a human pathogen that can lead to a severe, debilitating, and sometimes chronic disease affecting different organs. The bacterium is transmitted from cattle to human often though occupational exposure, but can also happen by consuming contaminated dairy products, which is the case with Udder Milk.

Symptoms of Brucella abortus RB51 infection include lasting fatigue, muscle pain, arthritis, swelling of the testicles, and depression, according to Food Safety News. Long-term health complications from untreated B. abortus infection include arthritis, spleen or liver enlargement, heart problems, and in rare cases, meningitis and other nervous system issues.

Public health investigators have been unsuccessful in tracking down Udder Milk's dairy supplies, complicating their efforts to narrow down who's been affected. William Bower, who leads the CDC group that investigates brucellosis, said of the warning, according to Food Safety News,

Because health officials have no direct way to let people know they may have drunk contaminated milk, everyone who consumed milk from Udder Milk in the past six months should receive antibiotics now to avoid having long-term health effects from the bacteria.

But the CDC wasn't the first federal agency to caution against Udder Milk. The U.S. Food and Drug Administration issued a public warning on Nov. 17 urgiing people who drank raw milk from Udder milk to call their doctors and get tests from Brucella abortus RB51. The public health alert read,

This is important because the RB51 is resistant to certain antibiotics. The only way to diagnose people who are infected with this strain is by growing the bacteria through bacterial culture, as opposed to a blood test.

The FDA warning, and subsequent alert from the CDC, also come of the heels of two cease-and-desist letters issued to Udder Milk by officials in New Jersey and Rhode Island, respectively. Earlier this month, the New Jersey Department of Health ordered the company to stop its illegal distribution of raw milk products, which is sold through members-only websites and delivery sites, according to the Asbury Park Press. Less than a week later, health officials in Rhode Island issued a similar cease-and-desist order to Udder Milk, according to Food Safety News. As of Wednesday, Udder Milk's website is still up and running, with a notice of private co-op posted on November 18 that seemingly absolves the company of responsibility.