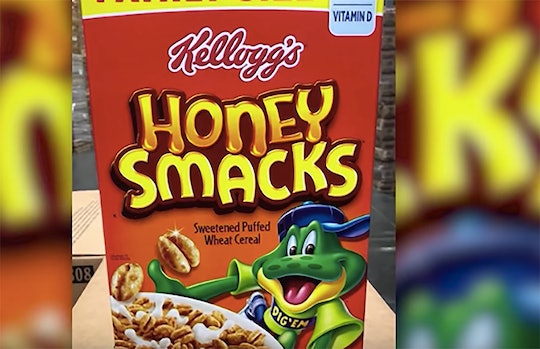 The Centers for Disease Control and Prevention has urged consumers again on Tuesday not to eat Kellogg's Honey Smacks cereal after 30 more people became sick due to Salmonella poisoning. The CDC released the update three months after Kellogg’s recalled the cereal over contamination concerns in June. Despite the recall and another warning from the CDC in July, it seems that some consumers are still eating the product, prompting health agencies to issue additional warnings.

Kellog's did not immediately respond to Romper’s request for comment.

Concern over the breakfast food started when Kellogg's voluntarily recalled its popular Honey Smacks cereal in June after 73 people in 31 states became infected with the Salmonella Mbandaka strain, according to NPR. The company advised consumers to throw out 15.3 oz. and 23.0 oz. boxes of the cereal, and to avoid products with a "best if used by" date on the top of the box between June 14, 2018 and June 14, 2019, according to the Food and Drug Administration.

"Retailers cannot legally offer the cereal for sale and consumers should not purchase Kellogg's Honey Smacks cereal," the FDA said at the time, according to The Washington Post.

Although multiple warnings had been issued, 27 more people fell ill in July, and the infection spread to two additional states. The CDC simply tweeted: "OUTBREAK Update: 100 Salmonella infections in 33 states linked to Kellogg’s Honey Smacks cereal. Do not eat this cereal."

Given the large scope of the outbreak, the CDC warned retailers on Tuesday to not sell any Honey Smacks cereal products, as outlined in the initial recall. Some retailers were reportedly caught selling the affected products a month after the recall, according to CNBC, so this reminder is especially important.

Additionally, do not eat any Honey Smacks cereal at this time, especially if you already have the product in your house. "People who recently became ill report eating Kellogg’s Honey Smacks cereal that they had in their homes," the CDC advised, according to TIME.

Making matters even more concerning? Children are "most likely" to develop Salmonellosis. The FDA stated on its website:

Children are the most likely to get salmonellosis. The rate of diagnosed infections in children less than five years old is higher than the rate in all other people. Children younger than five, the elderly, and those people with weakened immune systems are more likely to have severe infections. It is estimated that approximately 400 persons in the United States die each year with acute salmonellosis.

Translation: Do not eat or give your children Honey Smacks cereal. Although it's frustrating to waste food and money, your health or the well-being of your loved ones is a priority.

With this new warning in place, hopefully all consumers and retailers heed the CDC's latest update and advice.