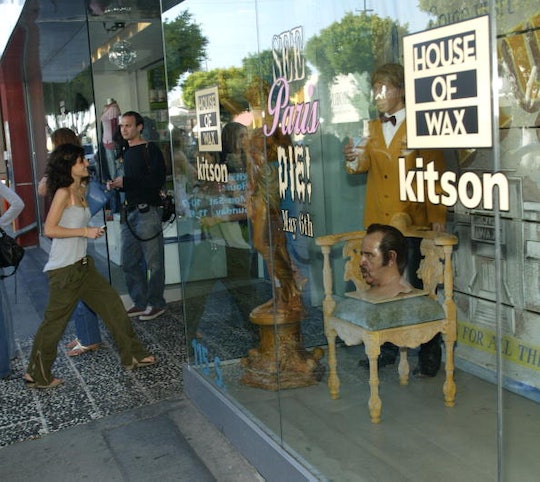 Thursday marked the end of an era for those of us who ever tied up our t-shirts a la a Britney Spears' music video or loved Lindsay Lohan's effortless California looks. Yesterday, LA-based boutique clothing chain Kitson announced that it would be closing for good, shutting down its website and all 17 of its stores located throughout California, Oregon, and Nevada. Although the Los Angeles Times reports that James Wong, Kitson's chief restructuring officer, is talking with "interested parties" to preserve the brand, going out of business sales have bene put into affect both online and in stores. The company has run into financial difficulties over the last few years. Most recently, the Wall Street Journal reported that Kitson was acquired by Spencer Spirit, the owner of Spencer’s novelty gift stores and Spirit Halloween costume shops, in attempts to saved the beloved brand.

The chain still holds nostalgia for the attitude we sported in the early 2000s — even now, it announced its closing sale as a "Big-Ass In-Store Sale!" — and was frequented by all of our favorite famous faces from those years, from Britney Spears to Paris Hilton. What Hollister and American Eagle were for high school kids, Kitson was for young starlets getting their start in Hollywood. Even today, its tweets include that signature sass from the 2000s, with phrases like, "Cause duh" and "Oh, did we offend you?"

When Spears was having a rough time, she had Kitson open up for some therapy shopping at 2 a.m. When Kim Kardashian's name was popping up in headlines, it was often connected to an appearance at the trendy boutique. At some point, every celebrity from Hilary Duff to Eva Longoria to Rihanna was photographed with a coveted baby blue Kitson bag, making "being seen" at the shop as enviable as being snapped at a runway or red carpet.

The shop made it into headlines pretty frequently itself. One of its most notorious scandals emerged when the shop offered up jerseys emblazoned with prescription drug names, which sparked lawsuits and plenty of internet rage. But clearly not as much upset as the store's closing.

Ah, Kitson. As with all good things from our millennial days (Tamagotchis and Furbies, anyone?), we had to say goodbye eventually. On the bright side, for those feeling especially nostalgic, Kitson is offering 30 to 50 percent off in all its stores. So slip on your best pair of oversized sunglasses and Ugg,s and snag yourself that last bit of high '00s fashion.