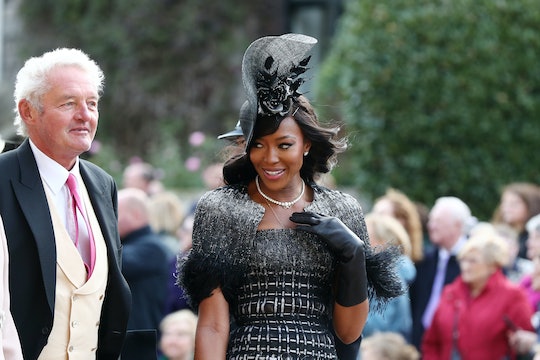 Princess Eugenie's Wedding Had Quite The Celeb Guest List

Though it may not have garnered the same kind of worldwide attention as the other royal wedding that took place earlier this year, Princess Eugenie's Windsor Castle wedding to Jack Brooksbank Friday was certainly a major event. And, just like Prince Harry, Duke of Sussex, and Meghan, Duchess of Sussex, the newest royal newlyweds also had quite an impressive guest list. In the lead up to the wedding, rumors swirled about just who might have been asked to be one of the 850 guests, and it turns out that the celeb guests at Princess Eugenie's wedding were actually also pretty A-list.

Brooksbank may not have received a fancy royal title from the Queen the way that both Meghan, and Catherine, Duchess of Cambridge, did, but he clearly still has quite the impressive social circle nonetheless. Although rumored guests, George and Amal Clooney didn't appear to be in attendance at St. George's Chapel, they actually have an interesting link to Brooksbank: Princess Eugenie's new husband is a brand ambassador for Casamigos Tequila, a company owned by George Clooney. And, in a move that may have been somewhat awkward for Harry and Meghan, a couple of the prince's former girlfriends were actually included also in for Princess Eugenie and Brooksbank's big day.

Chelsy Davy, who dated Harry for seven years when the two were in their 20s, according to The Sun, was one of the first well-known guests to arrive the wedding earlier in the morning. But though it's been many years since she and the prince were involved, it seems she's still tight in royal circles — in addition to being a friend of Eugenie and Brooksbank, she was also invited to Prince Harry and Meghan's wedding in May.

Also in attendance? Cressida Bonas — a close friend of Eugenie's who also happened to previously date the prince, according to The Sun.

British musician Robbie Williams also made his way into the chapel alongside his wife, Ayda Field, and his mother, according to The Mirror. Williams and Field are said to have become friends with the royal couple after originally being introduced by Princess Eugenie's mother, Sarah, Duchess of York, and it seems that they have definitely become close: their 6-year-old daughter, Theodora, is actually one of Eugenie's bridesmaids, according to Town & Country.

A few fairly surprising guests? Singer Ricky Martin, and actress Demi Moore. It's not entirely sure how they are each connected to the princess and Brooksbank, but clearly neither wanted to miss the big event. What isn't surprising though? Moore looked absolutely gorgeous, opting for a crimson dress with a matching fascinator:

Although Princess Eugenie and Brooksbank specifically opted for a very formal dress code — day dresses and hats for women, and morning suits for men — a few of the guests *did* opt to take some fashion risks. One of the celebs with a particularly notable look? Model Cara Delevingne, who actually arrived dressed in a grey top hat and a black tailcoat.

While Princess Eugenie's wedding may not have had the same star power as her cousin, Prince Harry's — the Clooneys *did* attend Harry and Meghan's wedding, for example, as did other big names, like Oprah Winfrey, Serena Williams, and David and Victoria Beckham — she and Brooksbank certainly weren't lacking when it came to their guest list. And celebrity guests aside, it seems like, most importantly, the couple was also surrounded by lots of supportive friends and family, who were overjoyed to share in their big day.