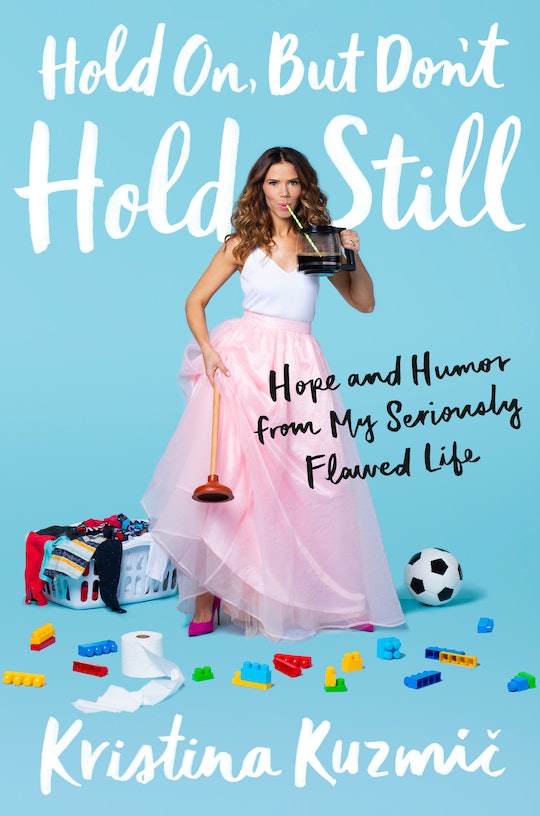 I Celebrated My Husband's Vasectomy With A Cake, & That Attitude Is Key — Excerpt

When my firstborn turned six months old, I decided that this milestone was definitely worth celebrating. And what started as a one‑off event quickly became a family tradition: For my kids’ half birthdays I make half a cake (it looks like someone just cut a cake down the middle and made the other half disappear), and we sing every other syllable of the “Happy Birthday” song (I’m really good at complicating things, and singing only the first half of the song seemed unfair to the second half). We don’t do gifts or a big bash, and we don’t blow out candles and make wishes, because wishes should be made only full throttle. We just end the day with a little celebration after dinner, something kind of silly and fun. And cake. Because everything in life should end with sugar.

This little tradition brought so much joy to our family that I decided we should celebrate other random days, too. I wanted to make more of an effort to celebrate successes (big or small) but also to celebrate the not‑so‑fun‑but‑just‑as‑important moments in life. When a friend of ours lost his job because the company he worked for was downsizing, I asked him if we could throw him a party. With his enthusiastic consent, I sent out an Evite invitation for an “I Got Laid Off Party” to celebrate our friend’s new beginnings. If anyone else had ever been laid off, we would celebrate them, too. Getting fired usually means that you sit on your couch feeling crappy and panicking about the future alone. But how much nicer is it to deal with disappointment when you’re surrounded by friends who share stories about the times they were fired? And also cake. Obviously.

I bought a bunch of little footballs from a party store, let out the air, and those became the party favors: deflated balls.

About a year after Ari was born, Philip and I decided that he should have a vasectomy and that if his balls were going to endure a painful procedure, they deserved a party. We sent out invites to our close friends that featured a photo of a lemon with the caption “All juice, no seeds!” I prepared a menu of meatballs, spicy cheese balls, Cuban stuffed‑potato balls, Sicilian arancini (risotto balls), cake pops, truffles, coconut almond balls ... well, you get the idea. Balls. Only balls. Earlier that year the New England Patriots were accused of deliberately deflating footballs before the Super Bowl in what became known as the famous “Deflategate,” so I bought a bunch of little footballs from a party store, let out the air, and those became the party favors: deflated balls. So two days after Philip’s vasectomy, as he sat on the sofa with a bag of frozen peas on his crotch, our house was filled with our favorite people and a lot of laughter.

Why all this fanfare and fuss for the little stuff? Well, the truth is that I don’t naturally see the bright side of things. My default worldview is pessimistic. (Probably in part because I’m Croatian. I don’t know if you’ve ever delved into Eastern European literature, but let me tell you, it’s pretty bleak stuff. Brilliant! But bleak.) I consider myself a recovering pessimist. I have learned to go out of my way to proactively create my bliss. Finding the good in life is a struggle for me and a conscious choice I have to make daily, since, apparently, you can’t have Amazon Prime just deliver a box of happy to your house. They sell pretty much everything except for the stuff I really need: joy, patience, naps.

Every time you have something negative to say, you have to follow it up with a ‘Yeah, but ...’

I noticed early on in motherhood that my children inherited my tendency toward the negative. Years ago, while driving home from a soccer game, I was listening to my kids whine about their day. Practically everything made their list of complaints, and I was sick of it. I decided something had to change, so I made up a new game.

“All right, Luka and Matea,” I yelled from the front seat, “I have a new game for us. It’s called Yeah, But. Every time you have something negative to say, you have to follow it up with a ‘Yeah, but ...’ and then add something positive. I’ll start. Ugh, I’m almost out of gas and the last thing I feel like doing right now is stopping at a gas station. Yeah, but ... I have a car! And I have money for gas, and I don’t ever want to take those things for granted. Okay, your turn now.”

Luka quickly spoke up. “We lost our soccer game, and I’m really upset about it. Yeah, but ... I love my team and my coach, and I’m glad we have another game next week.”

Then Matea chimed in. “I was really bored today all day.

Yeah, but ... tomorrow I have a playdate with Siena!”

The Yeah, But game has become a regular exercise in our home. I don’t allow my kids to dwell on the negative. They can complain, of course; I welcome them to express their aggravations and concerns and I think it’s really important to let them talk through those feelings. But then I try to encourage them to find something positive in whatever situation they’re dealing with. There are too many good things in their lives (in all of our lives) to let the days fly by without pausing to acknowledge our blessings, and I would be doing my children a disservice if I allowed them to always just wallow in the negative.

To compare the pitfalls of focusing on the negatives to food (since eating is my favorite sport), brooding over the annoyances, disappointments, frustrations, failures, pain, and resentment is like marinating chicken. A few hours or even a full day is good. But if I let that chicken sit in the marinade for weeks or months or years ... instead of ending up with a dish that I can proudly serve to my family, I will end up with a gelatinous poison. Same protocol applies to negative feelings. We should allow ourselves to feel what we feel. Take a dip in that marinade. Let the marinade make us more tender. Get a little seasoning. But don’t leave yourself marinating forever. The Yeah, But game is a way to finish the marinating process before it gets out of hand.