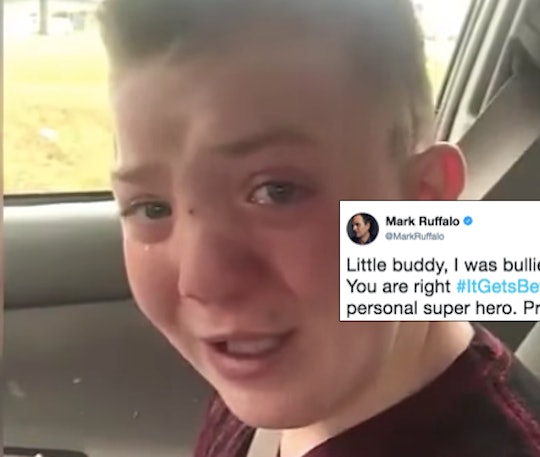 Bullying is never OK, but it's somewhat of a national epidemic and something that one middle schooler knows all to well. But, now that a heartbreaking video of 11-year-old Keaton Jones talking about getting bullied at school has gone viral, more people are starting to take notice and are collectively putting their foot down. Beyond the countless people on Twitter and Facebook supporting the boy's bravery, dozens of celebrities are applauding Keaton Jones' viral bullying video for the moving message it's spreading right now.

Keaton's mom, Kimberly Jones, took to Facebook on Friday to upload a video of her son crying in the car after getting bullied at school. In the video, which has since been made private, Keaton is in tears, explaining what happened to him at school and why he was going home early. "They make fun of my nose," he explained to his mom, as The Washington Post reported. "They call me ugly. They say I have no friends." And it's not just words, either. Keaton also explained that the kids at school had poured milk on him and put ham down his clothes at lunch.

Keaton's video has been resonating with many across the nation and it's also attracted a ton of attention from celebrities, public figures, and athletes who all want him to know that they stand with him.

Celebrities who have responded to the video since it was uploaded over the weekend include Chris Evans, Mark Ruffalo, Demi Lovato, Millie Bobby Brown, Snoop Dogg, Katy Perry, and many more.

It's not just words of encouragement that young Keaton is receiving. A GoFundMe has also been set up for Keaton and anti-bullying organizations.

Truly, Keaton's bravery has inspired so many others and his strength to come forward and to keep going hasn't gone unnoticed.

Keaton has also been invited to numerous events and concerts with celebrities offering to pay for his travel costs.

Beyond the attention Keaton's video has gotten from celebrities, it may do much more and could possibly save lives by bringing more awareness to the troubling trend of bullying. In fact, according to a 2014 study from JAMA Pediatrics, "Peer victimization was found to be related to both suicidal ideation and suicide attempts among children and adolescents."

So maybe, just maybe, Keaton taking a stance means that others who are being bullied will remember that they can get through it as well. And considering that his message has reached media personalities as well as a member of the first family, there's a good shot that Keaton's will reach those who need some words of encouragement.

The responses to Keaton's video have been so overwhelming, that, according to The New York Times, his mom has become a little apprehensive to all of the attention it's gotten. The New York Times reported that while Jones had posted this on her Facebook page as a public video, it's since been made private. "At the end of the day, this isn’t new for us, & we still have to truck on thru the day to day," she explained, the publication reported. "I’m humbled by the voice my boy has been given, but he’s still just a little boy, & he’s a little boy who desperately wants acceptance."

Hearing from dozens of A-list stars and prominent politicians is indeed overwhelming, so it's understandable that his family may want to step back a little while the nation consumes this important message. With this video out there and so much attention on it, hopefully we're one step closer to ending bullying once and for all.