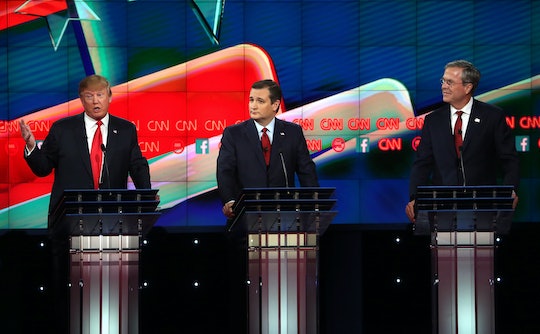 Celebrity Reactions To The GOP Debate On CNN Were, Well, Pretty Much What You'd Expect

The Republican presidential primaries have given us lots to think (and laugh about). Tonight’s GOP debate on CNN is no different, but as candidates like Donald Trump and Ted Cruz climb in recent polls, the stakes are higher than ever. But let's ignore all of those real-world implications, and focus on what's really important: celebrities. They have been making fun of the candidates throughout the entire election cycle thus far, which frankly, is something we rely on them for, so thank god they're delivering. Darrell Hammond has been doing a solid Donald Trump all year. And as soon as Republicans took the stage Tuesday night, celebrities tweeted their reactions to the GOP debate.

And it's not like tonight is the start of celebrity commentary on the impending presidential election, or more specifically, the candidates themselves: J.K Rowling said that Trump was worse than Voldemort. Rob Delaney offered — jokingly, we think — to give discounts at his vape shop for Muslims. Now that things are getting heated in the campaign, Hollywood is starting to make more noise than usual about the upcoming election. Recently, a lot of our favorite celebs have spoken out about the Republican candidates. Tonight's debate was no different. Some of the most vocal were watching tonight, too.

Some Were Able To Find Humor In The Debate...

Others Weren't Laughing At All

And Making Fun Of The Candidates, Of Course

They say Hollywood pays for Washington — but tonight, at least, Hollywood is laughing at and calling them out.