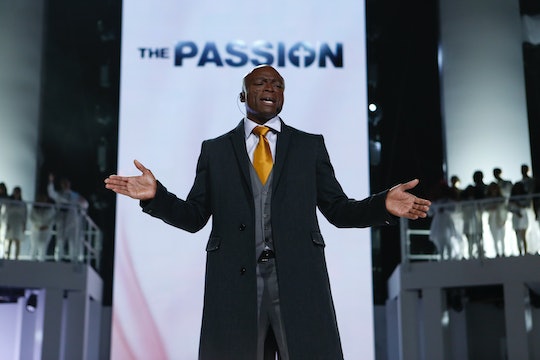 When a bunch of pop stars and Tyler Perry decide to put on a Passion of the Christ musical, everyone gathers around the television. If you were enjoying the show, these celeb reactions to The Passion should show you that you were in good company on Sunday night. Putting on a live show of that size is obviously no easy feat, but the entire cast and producers of the whole ordeal should be feeling pretty good about how it went down. Reactions to the musical on Twitter ran the gamut of emotions, just like you'd expect from such an extravagant production. Everything about the show was, as Donald Trump would say, "huge." The crowds, the cross, and the musical numbers had Twitter feeling all the feels.

Celebrities were just as into watching the spectacle — and if they weren't impressed, they were joking about how hard it would be to put on, applauding their friends, and appreciating the hard work it took to make sure the show went down. In case you missed it, picture this: about 30,000 people wandering around the city of New Orleans watching actors put on the stages of the cross. Every once in awhile they break into contemporary pop songs, all while Tyler Perry narrates the whole thing. Crazy, right? Celebs thought so, too:

Despite what they may have thought about the production or whether they were religious, celebs were "just like us" on Sunday, mesmerized by the whole spectacle. And who could blame them? It was interesting, at the very least.