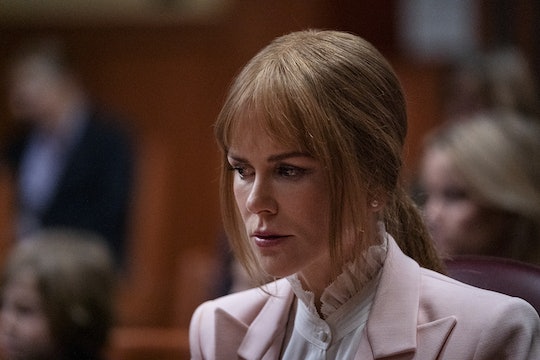 Last year during my sociolinguistics class in graduate school, my professor introduced me to the concept of facework. Judith Anne Spiers refers to face work as “ways people cooperatively attempt to promote both the other's and one's own sense of self-esteem, autonomy, and solidarity in conversation.” Most people have probably heard of “saving face” and “losing face,” both of which are related to face work. This process revolves around how we are perceived by other people, and is a good companion to the concept of emotional labor. The perception and opinion of the masses has mattered little more in any other place than it does in Monterey

When I think of face work, I think of the proverbial masks the women of the sardonic, soapy delight that is Big Little Lies cloak themselves in like Chanel perfume. This season, much of the face work behind the ladies of Monterey is performed to save face and hide the secret they’re all keeping for Bonnie (Zoe Kravitz). But the running, rumbling current of each of their individual struggles are weighing these woman down with the emotional labor of constant face work.

Madeline (Reese Witherspoon) must mask herself in perky perfection so that she can shield everyone (and herself) from the crippling self-esteem issues she actually has. Jane (Shailene Woodley) wears less of a mask and more of a continuous face work to convince both others and herself that she hasn’t been irreparably damaged by her past trauma. Bonnie hides behind her enlightened, new age vibe, quietly brimming with rage and shame that we’re learning is decades in the making.

We watched in awe last year as Celeste struggled to convince her therapist that she wasn’t being straight-up abused.

And then you have Celeste (Nicole Kidman), who continues to perform the most exhaustive labor of face work of anyone on the show. We knew that hardships for Celeste weren’t over when Perry took that assisted tumble down the steps at the end of season one, but surely they couldn’t get any worse. We watched in awe last year as Celeste struggled to convince her therapist that she wasn’t being straight-up abused but was rather just in a toxic relationship where both she and Perry were addicted to violent sex. We winced and had to look away multiple times when Perry beat Celeste nearly to within an inch of her life. Then we watched this all be completely contradicted by a picture-perfect marriage projected onto the rest of the community and even Celeste’s best friends, unable to see her bruised skin under that hundred dollar concealer and those cashmere sweaters. “I should have known,” Madeline tells Celeste in the finale as the extent of the damage is made clear.

Now, when Celeste should be able to begin to heal, to begin to feel free from the violent grip of a husband who expresses his twisted version of love through an open-handed slap in the race or jealousy-fueled punch in the stomach followed by shame coated in lavish gifts and sob stories. But no, Celeste’s face work has just begun. Although she’s fumbled a bit during her recovery and sudden existence as a new widow and single mother of twins, Celeste’s problematic relationship with sleeping pills her trysts with hot strangers and rough sex don’t hold a candle to the facework she performs in the wake of Perry’s death, in promising her two children that they will be OK, and in the courtroom through the penultimate episodes of Season 2.

Celeste is put in the impossible position of convincing Mary Louise of her husband’s fatal flaws without becoming a suspect herself.

As a traumatized and abused woman who abruptly and violently escaped her abuser, Celeste is left to balance raising two boys who worship their father and show signs of having adopted some of his violent tendencies. How does one work to convince two young children that their father was both who they thought he was and someone they should not strive to emulate? Celeste is also forced into a showdown with her mother-in-law who is in adamant denial of the allegations against her son as a rapist and abuser.

Mary Louise is a wolf in flawless Meryl Streep clothing, out to preserve her son’s name and sabotage Celeste’s reputation, all while passive aggressively sugar coating her nefarious motives to replace Perry and her other deceased son with Celeste’s children as her new boys to raise. As a result, Celeste is put in the impossible position of convincing Mary Louise of her husband’s fatal flaws without becoming a suspect herself, as the person with the most motivation to kill her husband.

All of this facework leaves us wondering who exactly Celeste Wright is now.

If that’s not enough, enter Celeste’s previously prudent and currently borderline cruel therapist. Celeste’s biggest emotional hurdle seems to be saving her face against, well, her own self. As Celeste struggles against missing her husband and focusing on their often fleeting but frequently ostentatious happy moments together, she works to convince her therapy that she deserves to mourn her husband rather than rejoice in her own freedom.

All of this face work leaves us wondering who exactly Celeste Wright is now, or who she would be able to become if released from the full-time job of convincing everyone around her that she’s something different. To Jane she is the kind friend and generous widow of her rapist, but she’s also someone who can’t fully admit the details of how Perry’s abuse spilled over into their sex life. To Madeline she is a fiercely loyal supporter, but she barely gives Madeline a glimpse of her being anything less than an unwavering pillar of pristine friendship.

Celeste is something different to every single person in Monterey, as well as herself. To me, Celeste deserves a raise. Her face work has put in some serious overtime, and it’s about time for Celeste to get paid.