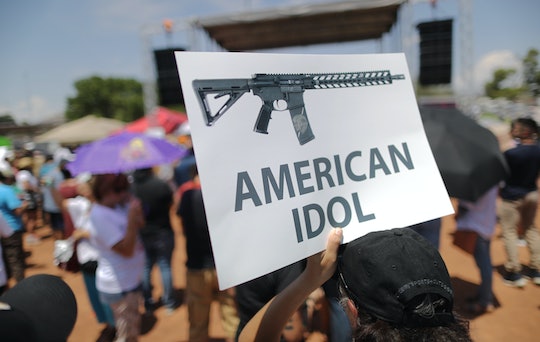 Frustrated by what's characterized as "a public health crisis," more than a hundred CEOs are demanding Congress take action on gun violence following mass shootings in Dayton, Ohio, and El Paso and West Texas. In a letter sent to members of the U.S. Senate on Thursday — and shared with The New York Times — CEOs from 145 different U.S.-based companies urged legislators to take up and pass gun control legislation that had already been passed by the House of Representatives.

"Doing nothing about America’s gun violence crisis is simply unacceptable and it is time to stand with the American public on gun safety," the letter, which was signed by the CEOs of some major national companies, including Airbnb, Condé Nast, Gap Inc., Levi Strauss & Co., Lyft, Modern Fertility, Pinterest, Royal Caribbean Cruises Ltd., Twitter, Squarespace, TOMS, Uber, and Yelp to name only a few, read. "Gun violence in America is not inevitable; it's preventable. There are steps Congress can, and must, take to prevent and reduce gun violence."

To prevent tragedies like the mass shooting that occurred Aug. 3 when an armed man walked into a Walmart store in El Paso, Texas, and shot and killed 22 people, the CEOs urged the Senate "to support common-sense gun laws."

"We urge the Senate to stand with the American public and take action on gun safety by passing a bill to require background checks on all gun sales and a strong Red Flag law that would allow courts to issue life-saving extreme risk protection orders," the letter read. It went on to urge the Senate to "follow the House's lead" and pass bipartisan legislation aimed at updating the nation's current background checks law to better reflect how buys are purchased today.

Earlier this year, the House passed two bills designed to strengthen background checks. If fully passed into law, the first bill would broaden the federal mandate on background checks to include firearm sales conducted by private sellers, NPR has reported. The other, extends the period of time in which the FBI has to conduct a background check before a firearm sale is considered complete from three to 10 days.

In their letter to the Senate, the CEOs argued that extending background checks to all firearm sales was a "common-sense solution" that enjoyed "overwhelming public support" and could be "a critical step toward stemming the gun violence epidemic in this country." The CEOs aren't wrong. The majority of Americans have, for a number of years now, supported universal background checks. In fact, a 2014 Quinnipiac University poll found that 92 percent of American voters supported laws requiring background checks on all gun buyers and all gun sales.

On Thursday, the CEOS also urged the Senate to pass an Extreme Risk, or Red Flag, law. Under such a law, immediate family members and law enforcement are able to petition a court of law to temporarily remove someone's guns and ability to obtain guns if said person is believed to pose a safety risk.

While President Donald Trump initially called for strengthening gun safety legislation like red flag laws after mass shootings in Texas and Ohio left dozens dead in early August, he has since appeared to scale back his support, according to TIME. But the president's supposed waffling may be at least partially to blame for Congress' apparent inaction on gun control. As Politico as previously reported, Sen. Majority Leader Mitch McConnell has said he would only call a vote on legislation the president had vowed to support and sign.

On Thursday, however, CEOs like Thrive Capital founder Joshua Kushner (Jared Kushner's brother), urged the Senate to stop delaying and take action on bipartisan common-sense gun control measures already widely supported by voters. "Every day, 100 Americans are shot and killed and hundreds more are wounded," their letter read. "This is a public health crisis that demands urgent action."