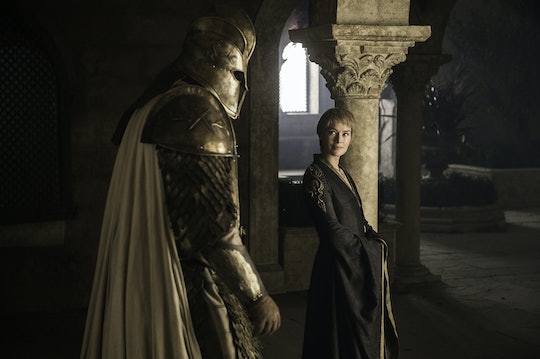 There was never any doubt that Cersei would find a way to get back at the Faith for what they put her through, and in the Season 6 finale she followed through on that promise. Cersei gets revenge on the shame nun on Game of Thrones, and it's as gruesome as one would expect from Cersei, both for what viewers see and for what they don't.

It starts with the nun in question – Septa Unella – strapped to a table while Cersei pours wine on her face and demands she "confess" in an echo of Cersei's time as a prisoner of the Faith. It only gets worse from there. After a long villainous monologue in which Cersei herself finally does all of the confessing – coming clean about killing Robert, sleeping with Jaime, and just about every other terrible deed she's done – she reminds Septa Unella of a promise she made once. Cersei said that her face would be the last thing Septa Unella saw before she died.

Septa Unella is cool with that – as a devout member of the Faith, she's ready to meet her makers (all seven of them). But Cersei has other plans.

First Cersei tells the septa that today will not be the day she dies; her death won't be quite so easy. Then Cersei invites her huge, murderous, zombie bodyguard Gregor Clegane into the room, and viewers finally get a glimpse of the truly terrifying visage underneath his golden helmet. He certainly looks like a corpse, gray-skinned and horrible, and he strikes fear into the septa's heart. As her terror mounts, Cersei calmly leaves her to the slow torture the Mountain is going to subject her to, though we don't know exactly what that will be. "Shame," Cersei repeats again and again as she leaves, shutting the door behind her, once again echoing Septa Unella herself.

Though viewers don't actually see the septa suffer at the hands of the Mountain, the implication of the horrors he's planning to inflict on her are bad enough. Having seen what he's capable of through the years – popping Oberyn Martell's head like a grape, for one, as well as his rape and murder of Elia Martell – the audience can guess at what will befall the septa. It's going to be awful, and Cersei will enjoy every second of it.

Despite the fact that Septa Unella was a smug jerk who certainly seemed to enjoy seeing Cersei laid low, she's going to pay for a lot more than that. Cersei isn't softhearted or inclined towards mercy; Septa Unella was a goner as soon as she made Cersei lap up water from the prison floor, and probably before. It's a shame.