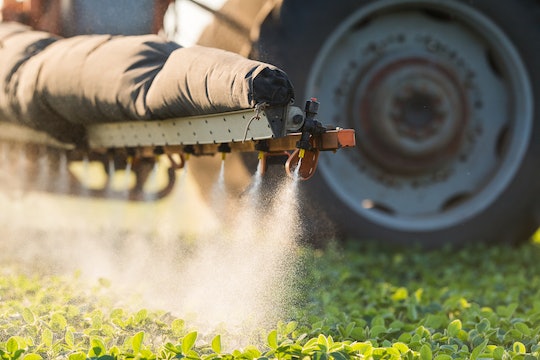 Some Insecticides May Be Linked To Neurodevelopmental Issues In Kids, Study Says

Insecticides have become common and incredibly difficult to avoid in life. Leading researchers, though, are now urging for divestment and calling on bans on some widely-used insecticides. According to new research, certain insecticides might be linked to neurodevelopmental issues in kids. These substances might be useful in the short-term for killing bugs, but at what cost?

Essentially, insecticides are pesticides that are specially-formulated to ward off, kill, or otherwise harm insects. Not all of them work the same. As outlined by the National Pesticide Information Center (NPIC), some may affect an insect's nervous system, others harm insects' exoskeletons, and still others "repel or control insects using different means." Since insecticides don't all work the same or come in the same form, the NPIC noted any risks they may pose to people, pets, or the environment may not be exactly the sam either.

In the past, pesticides have been linked to "birth abnormalities." One major concern for researchers in a 2017 study was the average person's inability to even track how much pesticide they're exposed to.

"Unlike smoking, which is observable, or even air pollution, for which there exists a robust network of monitors, publicly available pesticide use data are lacking for most of the world," researchers said, according to The Independent.

Now, with additional studies coming in, leading researchers are calling for a ban on widely-used insecticides called organophosphates.

In a scientific review and call to action published in PLOS Medicine, researchers put out a call for immediate government intervention to "phase out" all organophosphates.

Organophosphates are a group of insecticides, some of which are "highly toxic," according to the U.S. Environmental Protection Agency (EPA). Over the years, they've been used in all kinds of applications: for agriculture, in gardens, for home use, and even in veterinary arenas. A few are no longer used, while another notable one, chlorpyrifos, can't be used at home anymore.

Researchers have traced organophosphate exposure before birth to poorer cognitive, behavioral, and social development, as reported by the study's abstract — even at levels that are considered safe. Lead study author Irva Hertz-Picciotto, who is also the director of the UC Davis Environmental Health Sciences Center, said, according to Eurek!Alert:

"There is compelling evidence that exposure of pregnant women to very low levels of organophosphate pesticides is associated with lower IQs and difficulties with learning, memory, or attention in their children. Although a single organophosphate — chlorpyrifos — has been in the national spotlight, our review implicates the entire class of these compounds."

"Acute poisoning is tragic, of course, however the studies we reviewed suggest that the effects of chronic, low-level exposures on brain functioning persist through childhood and into adolescence and may be lifelong, which also is tragic," Hertz-Picciotto said, according to Eurek!Alert.

People can be exposed to insecticides in a variety of ways, including through the food and water they consume, as noted by the EPA.

Researchers offered a few recommendations for reducing organophosphate exposure, according to Eurek!Alert, such as removing them from use, monitoring sources of drinking water, and "establishing a system for reporting pesticide use and illnesses."

Until a ban occurs, as outlined in PLOS Medicine, researchers are calling for more education for doctors and nurses, along with an increased use of less-toxic alternatives.

The link between organophosphates and neurodevelopmental issues seems to have been fairly long established. Now, it's time for those in charge to weigh the research, as well as researcher's guidelines.