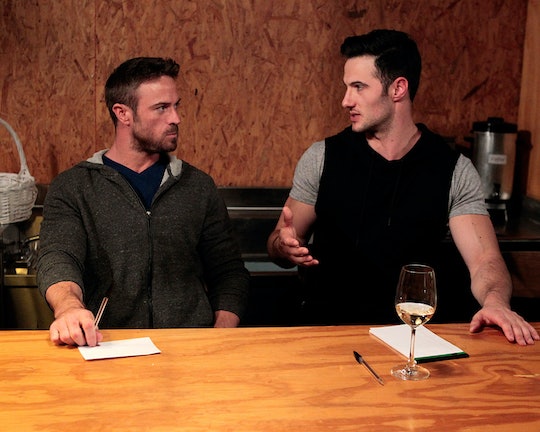 Chad & Daniel Reunite On 'Bachelor In Paradise' And It's Totally Bromantic

When Chad Johnson and Daniel Maguire met on The Bachelorette Season 20, it was evidently love at first sight. It's no exaggeration to say that the two bonded with one another almost instantly and far more than either bonded with the actual bachelorette that season, JoJo Fletcher. Lucky for us, we got to see Chad and Daniel reunite on Bachelor in Paradise and it was just as bromantic as you might have expected.

As soon as the casting news was announced and confirmed that both Daniel and Chad would be migrating over with other noteworthy Bachelor Nation alums to Mexico for a season of sexy, chaotic, drunken antics, I was thrilled. Though they each appeared in relatively few episodes of JoJo's season of The Bachelorette, they always brought the laughs with their eyebrow-raising and borderline absurd interactions. Who could ever forget that now-infamous Hitler-Mussolini conversation? Or their shared workout sesh? I laugh every single time I re-watch those scenes.

In the season premiere of Paradise, Daniel was off to a pretty terrible start. He showed up on the beach and was immediately nonplussed with the "selection" of women he found there, making some really atrocious and off-putting comments about them and even comparing them to both "bruised fruit" and stray dogs. Not cool, Daniel. Not. Cool. He also had one extraordinarily awkward and very brief conversation with Izzy, right before she realized that they were, um, not compatible (to put it mildly).

But things started to turn around for Daniel when his best bro Chad showed up. Daniel was by a landslide most enthused to see Chad, rather than any of the women he was ostensibly there to romance. They immediately fell back into their old, bro-y patterns, and the group of women immediately noticed the apparent love between the two.

Twitter, similarly, couldn't help but point out the similarities between how Chad and Daniel were acting with one another and how potential Bachelor romantic couples act.

"Can I steal you for a sec?" = probably the #1 line used by male contestants on female bachelorettes throughout the scenes.

As the two bonded over how much better they were than any of the other male suitors on the beach (EYE ROLL) and Chad tried to convince his pal that the group of women weren't all unworthy of the great and mighty Daniel, it quickly became clear that Chad and Daniel (Chaniel?) would be sticking together throughout the season. They basically shook on it. I'm truly shocked that Daniel didn't whip out the friendship bracelets.