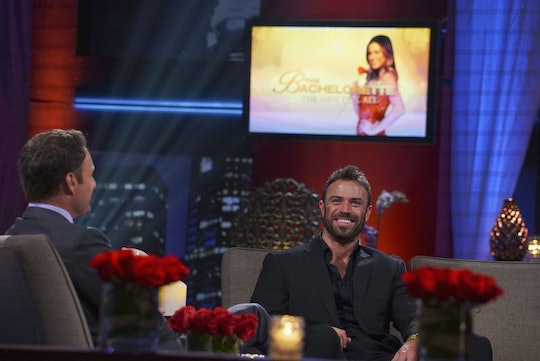 From the moment Chad Johnson hit our Bachelorette screens, it was so clear that the Season 12 villain would be a a total pop culture sensation. He's obviously very good-looking (I mean, duh), and his attractiveness paired with his self confidence (amplified by being stuck in close quarters with 25 other men) manifested in the perfect reality TV show villain. Of course, whether Chad is actually as egotistical, meat-loving, and aggressive as he comes off in the show is something we'll never truly know. One thing's for sure, though: Chad certainly did "lean in" to the whole villain thing, as some of the best Bachelorette Chad tweets can attest.

Between Instagram posts macking on the other suitors' ex-girlfriends and Twitter potshots at his fellow former contestants, Chad's social media presence is an endless font of pomposity and hilarity. Chad throwing shade, dispensing priceless life pro tips, and clapping back at the haters is equally as hilarious as watching him react to his ever-growing band of fans, both famous and not.

Throwing Shade At His Fellow Suitors

Luke Pell pretty much stayed far away from the Chad drama, so it's a little bit weird that Chad is going in so hard on making fun of Luke.

Chad joined in (more than once) with the ever-growing chorus of voices questioning whether Jordan Rodgers was on the show for "The Right Reasons."

Between the protein powder, glomming down meats, and working out with luggage strapped to his legs, Chad is clearly a master of staying fit in *any and all* situations. Even stuck in a house with 25 dudes who hate him.

You can never eat too much ice cream. So saith The Chad. So saith we all.

This is verging uncomfortably close to a Trumpism, except I think it's socially progressive? Maybe?

Call it egoism or call it self-love. Chad thinks everyone should love themselves the way Chad loves himself.

Not just every fetus is worthy of The Chad's DNA.

PSA: Don't take Viagra if you don't need Viagra. Gonna file this one away under "duh" and "dear god why."

Don't poke the Chad Bear about his alleged steroid usage.

Killin' the haters with kindness – it's the Chad way.

At some point prior to Chad reaching Peak Chad, Andi Dorfman, the star of The Bachelorette Season 10, thought Chad might win. Can you imagine? Chad could.

Chad Johnson: Vice President of the United States? The Chad and The Donald *do* have a lot of eerie similarities.

It somehow makes so much sense that an actor who formerly played a member of the Entourage crew would love Chad, doesn't it?

Spencer Pratt was arguably the single greatest reality TV villain of the early-mid aughts. It makes all the sense that he'd be drawn to another big personality, like The Chad.

Justin Bieber is a Chad fan and Chad took notice – and, hey, can't hurt to hit The Biebs up for a bit of a social media boost!

And finally, Chad went *all in* during the July 25 final three episode.