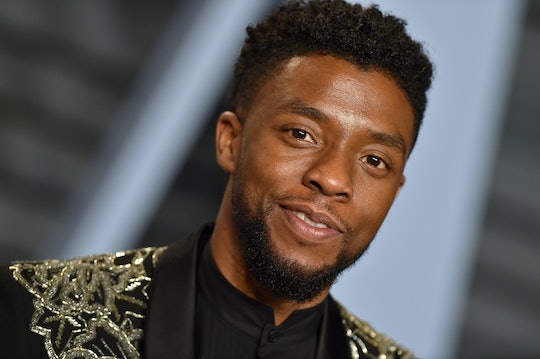 Following a four-year battle with colon cancer, actor Chadwick Boseman died Friday with his wife and family by his side. While the Black Panther star opted to keep his own cancer diagnosis private, he was well-known for supporting children. In fact, Boseman met with children fighting cancer while privately battling the disease himself.

According to St. Jude Children's Hospital, Boseman visited terminally-ill children at the facility in 2018, roughly two years after he was diagnosed with stage three colon cancer. "We are deeply saddened to hear of the passing of our friend Chadwick Boseman," St. Jude wrote in an Instagram post published Saturday. "Two years ago, Chadwick visited the St. Jude campus and brought with him not only toys for our patients but also joy, courage and inspiration. He was an incredible role model for our patients and children from all around the world. Our thoughts are with his family and friends at this time."

A statement confirming Boseman's passing noted the 43-year-old actor's cancer had progressed to stage four following his diagnosis in 2016. "A true fighter, Chadwick persevered through it all, and brought you many of the films you have come to love so much. From Marshall to Da 5 Bloods, August Wilson's Ma Rainey's Black Bottom and several more, all were filmed during and between countless surgeries and chemotherapy."

But it seems connecting with children battling terminal illnesses may have inspired the actor to continue with his work. Without revealing his own diagnosis, Boseman spoke out about the bond he'd developed with two children — named Ian and Taylor — while filming Black Panther in a 2018 SiriusXM interview.

"Throughout our filming, I was communicating with them, knowing that they were both terminal," Rolling Stone reported Boseman said in the interview. "And what they said to me, and their parents said, they're trying to hold on 'til this movie comes. And to a certain degree, you hear them say that and you're like, 'Wow, I gotta get up and go to the gym! I gotta get up and go to work. I gotta learn these lines, I gotta work on this accent'"

Ultimately, Boseman said the experience of getting to know such enthusiastic fans was humbling. "It's a humbling experience, because you're like, 'This can't mean that much to them.' Ya know?" he said. "But seeing how the world has taken this on … I realized, that they anticipated something great." The actor then became overwhelmed with emotion as he acknowledged the children's passing.

In the wake of his death, some of Boesman's youngest fans have carried out some of the most powerful tributes. Children of all ages have gathered their toys and Marvel figures together to hold their own memorial services for their icon using the Black Panther action figure.