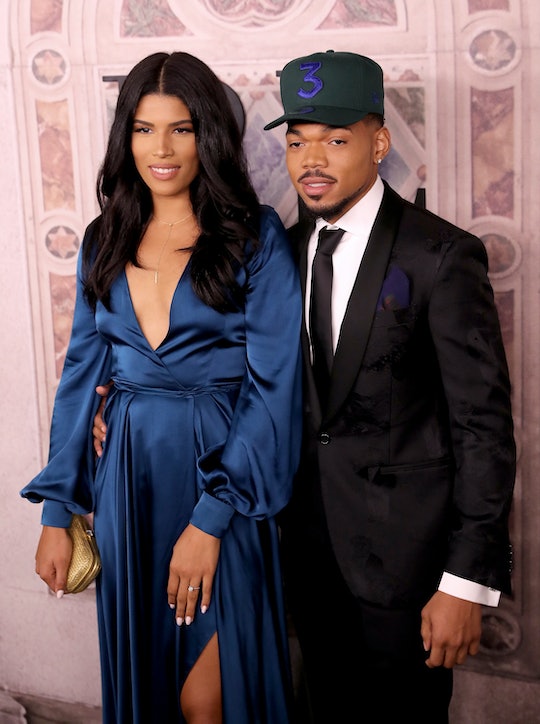 Chance The Rapper & Wife Kirsten Corley Are Expecting Baby No. 2

Just days after their gorgeous wedding, Chance the Rapper revealed he's expecting baby number two with his wife, Kirsten Corley. The performer dropped the sweet news Thursday via an Instagram post, in which he revealed a ton of details, including the baby's sex. Squee!

"I knew I was gonna marry that girl," he said about Corley, who he met at age 9, according to E! News. "Sixteen years later it's happening. This [weekend] is the time, and the place is my wedding. I'm gonna dance with my wife because this is my destiny." Aww.

Amid all of this love and celebration, Chance shared the news that he and Corley are expecting their second bambino. The parents already have a 3-year-old daughter named Kensli who they welcomed in September 2015, according to People.

In an adorable twist, Chance and Corley will add another little girl to their family's roster in September. "We pregnant again. It's a girl. JESUS CHRIST. WE LOVE YOU GOD," Chance wrote in his notes app, according to Instagram. "New baby droppin' September," he captioned the image.

Talk about a sweet coincidence, right? It would be even better if the sisters end up sharing birthdays.

Another person chimed in: "Congratulations. You two deserve nothing but pure happiness!!"

"OH MY she’s gonna be such a cutie," one fan said.

A commenter added: "It feels like blessings keep falling in your lap!"

After welcoming Kensli, Chance gave an interview about fatherhood with Billboard, in which he described the surprise of becoming a father at 22.

"I think most people go into denial — if you're a dude. I'm not shy in saying it, I didn't expect to become a father when I was 22 and it had a huge impact on what I was doing — I was touring a lot and I was trying to figure out where I was gonna go in the world," he explained. "At the time, I hadn't started on Coloring Book yet, I was working on Surf. I was about to release Surf when I found out."

Despite feeling a tad unprepared at first, Chance adores being a father. "I had never experienced joy like that before... Delving into family life is so f—kin' dope and so separate from any joy that you can receive being creative," he added.

Corley is more private than Chance is, so there aren't any public quotes from her about motherhood. But she does grace Chance's Instagram account quite often, and it's clear the two are madly in love with little Kensli.

"Nothing I'm doing currently would be possible without this girl right here. She's so kind and loving and brilliant and beautiful," Chance captioned the most precious Instagram photo of his little girl. "And I wouldn't have her without her mother, so thank you for creating and raising the greatest gift I've ever received. Cannot wait to get back to this."

I don't know about you guys, but I can't wait until Chance and Corley's second kid makes her debut in September just so I can read more gushing messages like this one. There's nothing more heartwarming, in my opinion, than parents who love their kids to the moon and back.