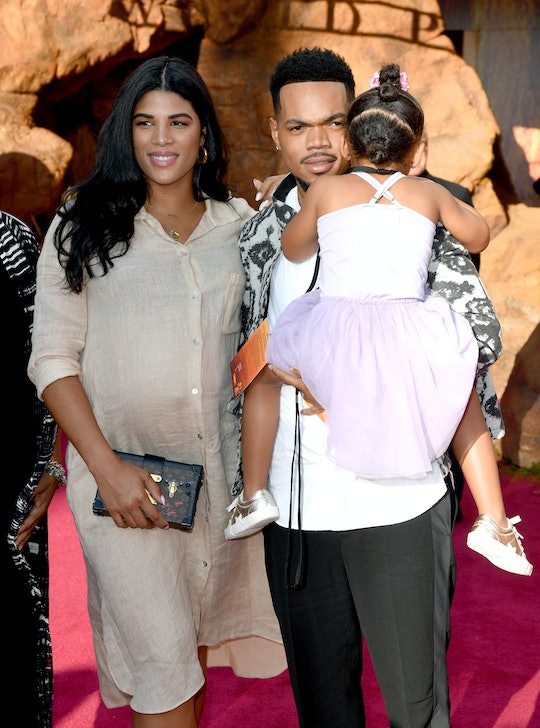 Chance The Rapper Is Officially A Father-Of-Two

Chance the Rapper should now go by the name "Chance the Father" because over the weekend, he took to Instagram where he revealed some very exciting news about his wife and their family. Yes, this means that Chance The Rapper welcomed baby number two with his wife, Kirsten Bennett, which could not be any more exciting.

Chance the Rapper (born Chancellor Bennett, in case you were wondering) and his longtime love, Kristen Bennett (formerly Corley, according to People), welcomed their second daughter some time this month. On Friday, Sept. 6, Bennett took to Instagram where she shared the very exciting news with her followers. In the photo, the baby's body can be seen laying down on a blanket next to a stuffed animal, wearing a onesie that says "I Am Who He Says I Am." And in the caption of the photo, Bennett revealed their little girl's name. "Our sweet baby girl, Marli, is here," she wrote.

But there are a few details that Bennett left out. It's unclear exactly when she gave birth to their daughter, what she looks like, and how the family is feeling about the birth. But one thing is definitely for certain — their fans are beyond excited for the little family and their newest addition.

"Congrats to you and Chance the Rapper!," one commenter wrote. "How beautiful! All the blessings on you and the Bennett bunch."

Bennett and Chance are the parents to a 4-year-old daughter named Kensli, who they welcomed into the world in September 2015, according to PopSugar. The couple married in March, after multiple years of dating, according to People. And just a few days after their wedding ceremony, Chance took to Instagram where they announced that they were expecting a second daughter, according to Us Weekly. "We pregnant again. It's a girl," Chance wrote in the very simple announcement shared to his Instagram. "New baby dropping in September," he added in the caption of the post.

And now, six months later, their daughter is finally here, which is so exciting. But if fans listened to Chance's new album (which was released at the end of July), The Big Day, closely, they would find that he had hinted about his daughter's arrival. In the opening song on the album, "All Day Long" Chance raps one particular line that stands out now that people are aware of his daughter's name. "Marli come soon, I only drop classics," he raps.

Since Chance knew very well that Marli was going to come into their lives very soon, it makes sense why he would hide his daughter's name into such a stand out song on his album. And in case people weren't aware from that specific line, Chance loves being a father. In a 2017 interview with Complex, Chance told the magazine that becoming a dad to Kensli changed his life. "I had never experienced joy like that before," he said, according to Billboard. "Delving into family life is so f—in' dope and so separate from any joy that you can receive being creative," he added.

His lyrics reflect that. In difference songs, Chance has detailed his plans to make the world a better place for his kids. And now that his newest arrival is finally here, it's likely that these feelings haven't changed. It's super apparent that Chance and his family are beyond excited about the arrival for their newest addition. Hopefully Marli's birth inspires a lot more new songs.