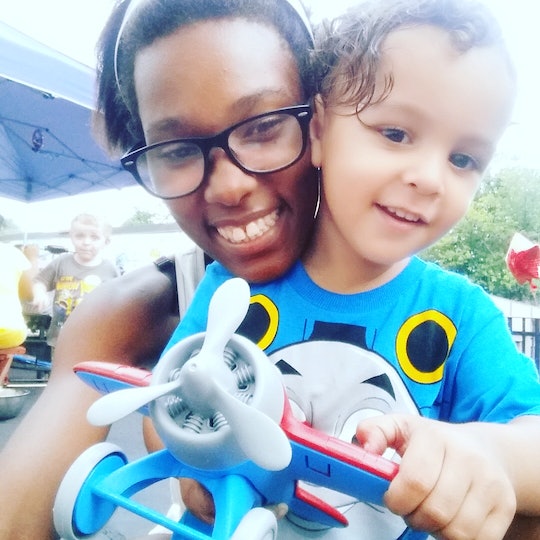 Right before I found out I was pregnant, I lost my job. I was working as a receptionist in a blowout bar at the time. It wasn't my life's work, but it was something I was good at, so I was devastated when they told me they were laying me off. I spent most of my pregnancy applying for jobs and going on interviews, trying to hide my growing belly. After a certain point, I could no longer hide that I was expecting. Still, I only talked about my pregnancy on job interviews if interviewers specifically asked me about it. I knew that legally, they could never say that they weren't hiring me because I was pregnant, but I knew that it was the reason why I wasn't getting hired.

Eventually, I got so fed up with going on interview after interview that I decided to pursue remote opportunities, such as customer service-type jobs. I began to scour websites for potential jobs to no avail. After my son was born, I kept going on interviews, but it didn't become any easier to find a job. Every time I told a potential employer that I was a new mom, I could feel them start to freeze up. One manager explicitly told me she was concerned that I would prioritize my child over my job and not take it seriously, even though I told her that I lived with my parents and would always have access to childcare.

So I gave up on the traditional career route. I decided that I needed something that was going to be flexible and allow me to take care of my child, especially because I'd just become a single mom. While mulling over my options, I remembered that I'd worked as a babysitter and nanny during college, and I'd always enjoyed it. So I updated my profiles on childcare sites and began responding to listings. I changed career paths right after having my first kid, and it was the smartest thing I ever did.

When I went on interviews, I was up front with the families I worked with that I had a young child, and that we could work together to come up with an arrangement that would work for all of us. A few families were OK with the idea of me bringing my son to their house, but none of the jobs quite panned out. One family was willing to bring their child to my house, since our children were both infants and the mother's office was close to my house, but she ended up going with another candidate at the last minute.

At a certain point in the job search process, I was getting a lot of pressure from my family to find a job, so I started to get nervous. Luckily, a few weeks later, I was contacted by the mom of a little girl in kindergarten, who just needed someone to pick her daughter up and hang out with her until she got home from work. The mom was OK with my son coming with me, and she even invited me to bring him to the interview. She said that her daughter loved kids and that she would be excited to make a new friend. We got along perfectly, and we decided that I'd start immediately.

I was lucky that I was able to work and make money, but also have enough flexibility to raise my son on my own.

I still work with this family, as well as a few other families as well. They tend to be families with older children who don’t really need my constant attention, or fellow single moms who understand how hard it is to strike a work/life balance. It took a lot of false starts for me to finally find a way to make it work, but I managed. I was lucky that I was able to work and make money, but also have enough flexibility to raise my son on my own.

My son was thrilled with my career change as well, and he loved coming to work with me. Every morning, I’d say, "Time to go to work!” and he'd sit while I put on his shoes and coat. He’d tell the bus drivers and fellow commuters that we were going to see whichever kid I happened to be babysitting for. It was almost like I was getting paid to arrange playdates for my kid.

While it's definitely still difficult to be a single working mom, I'm grateful that I figured out a career path that worked for me. I was lucky that I could work and earn money to support my son and raise him at the same time, especially because eventually, I was able to transition from full-time babysitting to a part-time writing career. I always saw childcare as a way to be able to develop my writing career and have a consistent income, so I'm grateful I'm able to balance the two.

Though it seemed like a tragedy at the time, losing my job and not going back to customer service was a blessing. Babysitting allowed me to spend more time with my son during his first years, which was hugely important to me, and I was significantly less stressed out than I had been in years. Ultimately, switching jobs allowed me to find a path to my true career, and I am so grateful for that.