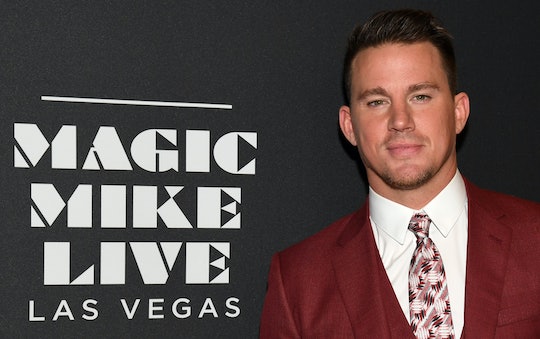 As studies prove that fathers today are more involved than those in the past, it's becoming more and more common to see headlines about dads hanging out with their kids, penning heartfelt tributes, and just generally having doting on their little ones for all to see. Whether it's drawing mustaches on a baby's face, or coordinating a dance with their little one, fathers today are truly stepping into their roles. And celebrity dads are no exception. So, in case you needed another reason to love Channing Tatum, the star of Magic Mike and the Vegas show Magic Mike Live, here's an excellent one: Channing Tatum's essay for daughter Everly is seriously amazing, and everyone should read it — whether you have a kid of your own or not.

In an essay for Cosmopolitan, Tatum took the opportunity to talk about the kind of future he hopes his daughter, 3-year-old Everly, will embrace. Tatum wrote that, "In honor of the launch of Magic Mike Live in Las Vegas, my friends at Cosmo generously invited me to write something for you," and that it was imagining his daughter reading such an essay in the future that inspired him to tell the heartwarming tale he did. Obviously, Cosmopolitan is well-known for its sex and relationship verticals, and their (sometimes confusing) sex position guides. So, Tatum decided to talk about just that — sort of.

In the essay, which will be featured in the June 2017 print issue of Cosmopolitan, Tatum talks about the worry he has that his daughter will become privy to what most women think men want:

We live in a society that has trained men and women to play certain kinds of roles for a long time, and the beauty of this amazing moment we’re living in is that we’re finally starting to break free from those roles. Women, especially, are realizing that they no longer have to conform to certain standards of social and sexual behavior, and this changes what they need from men and the role of men in general.

Because of these expectations, he decided to talk about the moment he knew he was meant to be with his wife, Jenna Dewan Tatum, forever. He described how "Jenna just blurted out that she knew exactly what she wanted in life and she didn’t have to look for it anymore because it was me."

It was that moment, when she took charge and showed Tatum her "radical authenticity," that he knew she was the one, he wrote. And in assembling the essay, Tatum said he hopes that one day, his daughter will know that she doesn't have to let anyone or anything get in her head — he wants Everly to "not allow preconceived standards to affect her, to ask herself what she wants and feel empowered enough to act on it."

And seriously, how awesome is that? Tatum recognizes that young women often go looking for acceptance in all the wrong places, and he hopes his daughter will take cues from her mother, and know that she alone is enough.

"When more women start to truly feel this power in themselves," he wrote, "the world will become so magical, it makes my head hurt." Damn straight, Tatum. That's some powerful fatherly wisdom.