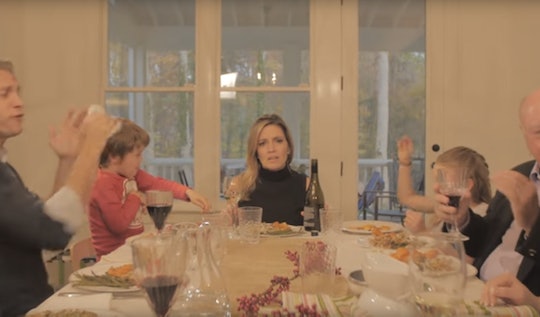 Time to sip your chardo-nae-nae, guys: the latest offering from YouTube stars The Holderness Family has gone viral, in all of its hilarious, song-parodying glory. Their “Ultimate Thanksgiving Mashup” or "Chardon-nae-nae" video has been viewed over 1.5 million times since its release Nov. 19, and perfectly sums up the reality of what Thanksgiving looks like when you have children: getting up super early to cook a turkey, kids who refuse to eat anything you made except for dessert, and boring in-laws who make you want to stare at your iPhone. And, of course, making it through with a little help from everyone’s favorite holiday coping mechanism, wine.

The clip features parodied version of Silento’s “Watch Me (Whip/Nae Nae)”, Adele’s “Hello,” and Drake’s “Hotline Bling,” and is the follow-up to their 2013 viral YouTube video, “#XMAS JAMMIES” (currently sitting at over 16 million views and counting). Their new video picks up where the old one left off, with the family of four dancing and singing shamelessly — although this time, Holderness Family fans have joined in on the act, with subscribers’ footage of their own Thanksgiving “Chardo-nae-nae”s featured in the video as well. On their YouTube page, the Holderness Family explains that the inspiration for the video was their own experience, and that the clip was “based on a true story: Our kids only eat dessert on Thanksgiving, Penn has ADD, and we loves us some Chardo-nae-nae.”

In other words, it's perfect way to make you feel better when the Pinterest-perfect Thanksgiving you’d envisioned in your head turned out to be a crazy stressful nightmare — just like everyone else's.