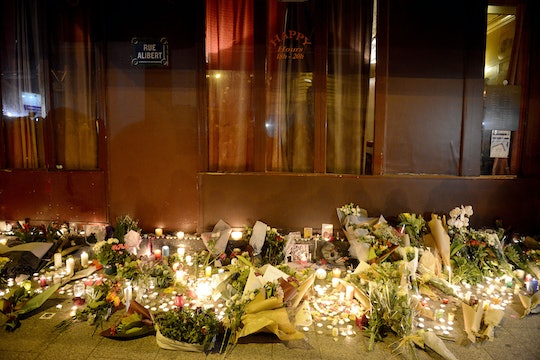 After seven assailants stormed six locations during a Paris terrorist attack Friday night, killing over 120 people and wounding over 350 more, a former terrorist attack in the area immediately came to everyone's mind. The Charlie Hebdo shooting, which took place in January 2015. On that day, two men attacked the offices of the famed French satirical newspaper, killing 11 people. Though there were certainly differences in both attacks — the death toll, and those responsible, to name a few (the Charlie Hebdo crime was perpetrated by those attached to Al-Qaeda, while ISIS has claimed responsibility for Friday's attacks) — the response was similar. Because after both attacks, France hit back with unabashed solidarity. And that includes Charlie Hebdo cartoonist Joann Sfar's new cartoon.

Somewhat unsurprisingly, Charlie Hebdo — which saw an outpouring of support following the deaths of its staff via #JeSuisCharlie and stunning tributes from cartoonists — has reached out to victims and mourners themselves with an image that has since gone viral. The cartoon tells supporters who are praying for victims that "we don't need more religion! Our faith goes to music! Kisses! Life! Champagne and joy! #ParisIsAboutLife."

And it seems people are certainly listening and responding to the message.

The cartoon is just one in a series from Sfar, who also wrote in another that "For centuries lovers of death have tried to make us lose life's flavor. They never succeed."