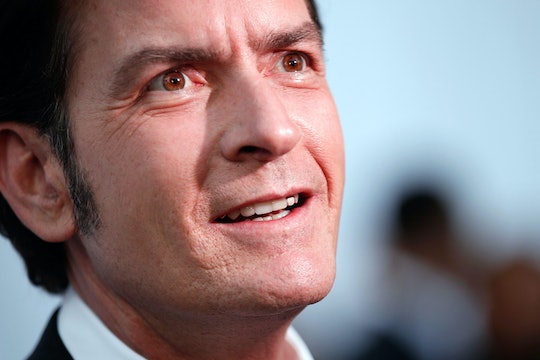 Charlie Sheen Says He Has HIV On 'Today,' & Has Paid Over $10 Million Dollars To Keep It A Secret, Until Now

Charlie Sheen is taking control of his own story. After tabloids released claims about the health of the actor in the past week, the former Two And A Half Men star is setting the record straight, even if the revelation wasn't a surprise to anyone who saw the reports in the past week. Because, as he said on Today, Charlie Sheen is HIV positive, and has known for the last four years. The actor also admitted that as rumors have spread since his 2011 diagnosis, he paid upwards of $10 million to keeping it all a secret. But now, he is finally coming clean; and he wants to put an end to all of the mistruths.

The confirmation comes just 24 hours after TMZ reported Sheen would talk to Matt Lauer about his diagnosis, and days after a blind item led to a distasteful witch hunt for the identity of an actor who has the disease. But though it's disappointing that tabloid reports forced Sheen to reveal his very personal diagnosis — even though publicist Howard Bragman (who does not work for Sheen) said "a lot of people in his life know about it" — it's easy to hope that a public face on the disease will help reduce its stigma as time wears on. Because, even to this day, so many myths about HIV live on.

Though, undoubtedly, many viewers will use Sheen's interview as an opportunity to joke about the perennial punching bag, we should instead pay attention to the content of his interview with Lauer.

While speaking with Lauer Monday morning, Sheen was more than candid about his diagnosis, his personal life, and why exactly he chose to speak out, as a few telling quotes from his interview show:

On Why He's Coming Forward Now

"I have to put a stop to this onslaught, this barrage of attacks and of sub-truths," said Sheen. "And [the] very harmful and material stories ... that [I am] threatening the health of so many others, which couldn’t be farther from the truth."

On The Media Reaction

"You never know how the media is going to roll with something," admitted Sheen. "I would hope that it will be... supportive. "

On The Potential Lawsuits That Could Now Come His Way

"I would be predicting the future and assuming the worst," said Sheen. "[But] I’m sure that’s next."

On Telling His Children

Though Sheen admitted he had not told his young children about his diagnosis, he did sit his 30-year-old daughter Cassandra down to tell her the news. "I told [my daughter] the other night and I felt bad," Sheen told Lauer. "It hit her hard. I said, 'Sweetie, I'm sorry I didn't tell you sooner, but it didn't seem like you could do anything for me and I didn't want to burden you with all of the stress.' But she was a rockstar about it."

"That’s not a completely inane or crazy statement," said Sheen. "I have to look at both sides. But I’m going to ride this wave of support. And if there was one guy on this planet to contract this that’s going to deliver a cure, it’s me. Seriously."

On Wanting To Be A Part Of The Cure

"I’m not going to be the poster man for this," said Sheen. "But I will not shun away from responsibilities and opportunities that drive me to helping others, and deliver the cure."

"I'm excited about doing a show again. I have a couple of films lined up that I think I can put start dates on," said Sheen. And when asked by Lauer about his public meltdown several years ago, and how he's since recovered, Sheen said: “There’s a lot of that that I’m not proud of. You can only hear ‘winning’ in the streets so many times. I pissed away a lot of great opportunities [in the past]. I'm approaching a time of more of a philanthropic time in my life."