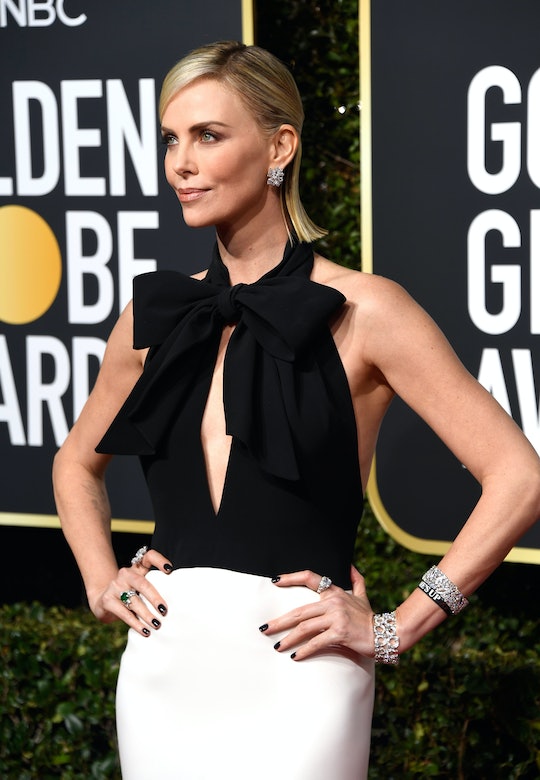 The 2019 awards season has officially kicked off! On Sunday, Jan. 6, celebrities took to the red carpet at the Golden Globes. Among them was Charlize Theron, who was nominated for Best Actress in a Motion Picture - Musical or Comedy for her role in Tully. However, on her way into the awards show, Charlize Theron got real about motherhood on the Golden Globes red carpet, and her message is so important.

Ahead of the big show, the actress opened up about how incredible parenthood can be, but also how messy it can be at the same time. And that's not something we see enough on any screen, or talk about, for that matter. Theron stopped to speak with E! News about Tully, during which she portrays a completely overwhelmed mom of three who ends up hiring a night nanny. The actress noted that she had actually received the script for the movie toward the end of 2015 — only a few months after she adopted her second child, a daughter named August.

"I was coming out of the early stages of being incredibly sleep deprived," Theron told Ryan Seacrest on the red carpet. "To me, it felt like something that felt super authentic. I think parenthood is incredible but it's messy. We don't see enough of that and I think it's hard on moms and society to feel that pressure." (Can I get an amen?!)

Theron went on to say that moms, especially, have been taught that looking after themselves first is selfish. She told Seacrest:

Somehow if you do that, you're a terrible mom. I know when I look after myself, I know that I'm a better mom to my kids.

OMG, it's so true. Moms are constantly bombarded with conflicting messages from society. Somehow, we're supposed to be everything for our children at all times while also attempting to maintain our own sanity. What's a frazzled parent supposed to do?

For the record, this wasn't Theron's only noteworthy red carpet interview. That's because Theron was also asked about the Time's Up campaign since she was among the celebrities who wore a bracelet in solidarity with the campaign, which stands up to sexual assault, harassment, and inequality in the workplace. "I think a lot has changed. I mean, when you look at the work that women have done in our industry with the projects they're doing — but also how vocal everybody is — we're talking about this," Theron told Variety. "And we're actually putting action towards that. And I'm so proud of our industry in the last year. And that we're done; we're not taking this. So, time's up."

In case you're wondering, this is actually Theron's fifth Golden Globe nomination, according to the award show's website. If she takes home a trophy on Sunday, it would be her second win. (She won back in 2004 for her role in Monster.) If you ask me, Charlize Theron has already won with her comments on motherhood and Time's Up. But another Golden Globe would definitely be icing on the cake!