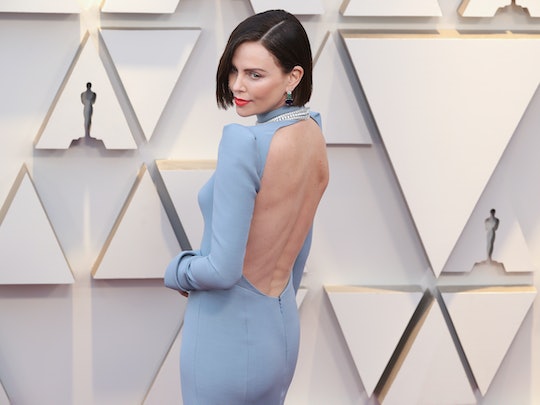 Although Hollywood celebrities often can't avoid the public eye, many have opted to keep their kids out of the spotlight while they're growing up. And though she doesn't often allow fans a glimpse into her family life, Charlize Theron shared a rare photo of her daughter, 4-year-old August, while on vacation. It was certainly a treat to see as the Bombshell star is known for keeping her children's faces off her social media accounts.

"We don’t wanna leaves," Theron wrote Sunday on Instagram in a post featuring a photo of her daughter reaching for a piece of fruit hanging in a tree. The sweet picture was taken while Theron and her family were reportedly on vacation, according to USA Today.

Considering Theron hasn't shared a photograph of her children on social media since November 2016, this rare look was certainly exciting see. The last time she shared a photo of her sweet kids was when she marked World Adoption Day with a photograph of smiley faces painted on her and her children's hands. "Happy World Adoption Day from our family to yours," she wrote in the caption of that photo. "If we continue to open our minds and hearts, maybe we will find ourselves in a world where every child has the loving family they deserve."

But just because Theron chooses to keep her children's faces off her social media, doesn't mean she doesn't like to brag about them or tell stories about their escapades. For instance, she recently told Jimmy Fallon her kids are constantly surprising her with what they know and often act like they're already smarter than mom.

"They feel like the limited amount of knowledge that they have at this age, they act as if they're masters of that knowledge, and use it consistently in a matter [of] like, 'You're stupid, mom,'" Theron said during an interview on The Tonight Show with Jimmy Fallon, according to People. "[August] always says — I'll say like, 'Isn't the sunrise so beautiful?' And she'll [be] like, ‘Actually, mom, actually, it's very rude to just say that the sun is beautiful.'"

When asked where she thinks her daughter learns words like "actually," Theron joked that "a stranger" must come in to her house at 3 a.m. because "none of us use any of the words [my kids use]." Theron also said her youngest had somehow managed to learn technical martial arts grips and once put her assistant in a "back lock." As the actor shared, "I was somewhat impressed but I was like where is she learning all of this stuff from because it's not [from me]."

Of course, Theron's recent interview with Fallon wasn't the first time she's boasted about her kids' ability to make her laugh. She's previously told People that her two children make her laugh "like nobody's business." Theron has also opened up about how she always knew her sweet family would grow through adoption. "Even when I was in relationships, I was always honest with my partners, that adoption was how my family would look one day," Theron told People in 2018. "This was definitely not a second option for me. It was always my first."

While Theron is keeping her children away from the spotlight her career and fame bring, it's nice to get a rare peek inside the actor's family life.