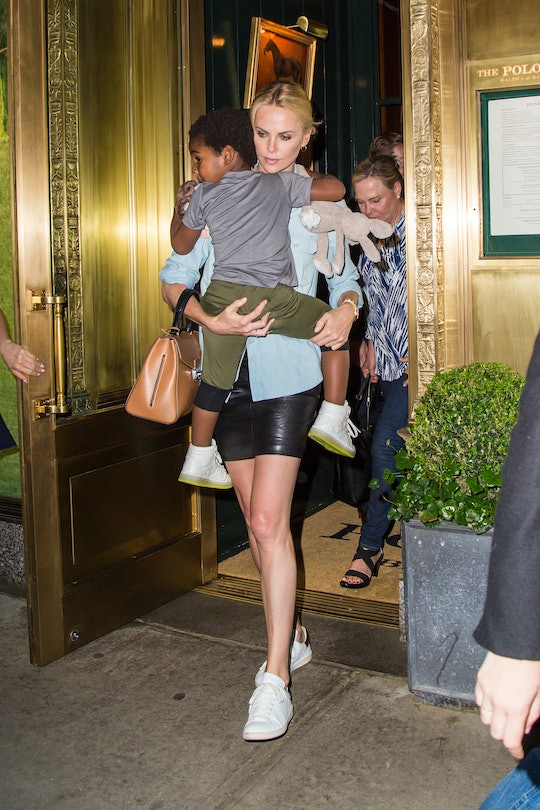 Along with being an Oscar-nominated actress, Charlize Theron is also mom to "two beautiful, proud, black African girls," and has been very vocal about allowing her children to determine who they will be. Both were adopted, something else that she has spoken about very openly. Overall, Charlize Theron's quotes about her children show that she is a devoted and loving mother.

Theron has been nominated for the Academy Award for Best Actress for her role in Bombshell. She played the role Megyn Kelly in Jay Roach’s award-winning film exploring the toxic work culture of sexual misconduct at Fox News, fully embracing famous broadcaster's views for the performance, despite their being at odds with her own. While Kelly and Theron's backgrounds are certainly different, they do have motherhood in common.

Theron's oldest child, Jackson, was adopted back in March 2012. At 3 years old, Jackson told Theron, "I am not a boy," according to Women's Health, and since then, Theron has been open about how she's embracing her children's identities. In May 2015, Theron adopted her youngest child, August. The three of them make an adorable little family and, over the years, Theron has made some touching comments on her love for her children and her role as a mother.

On How Motherhood Changed Her Life

Speaking with Elle in 2016, Theron explained the ways in which she was impacted by motherhood:

Everything has changed! When I became a mother, I had already wanted it for a long time. I craved motherhood, and I was incredibly invested in it. It’s not easy to adopt, even when you’re a celebrity. But when I held my children in my arms, I was happier than I ever expected to be. Today, motherhood is a source of joy every single day, something stronger than everything else, more powerful than my career.

On Letting Her Kids Be Themselves

After Jackson told Theron that she is a girl, Theron was quick to embrace the change in her perception. Speaking with Daily Mail in April 2019, she explained that that is her job as a parent:

[My kids] were born who they are and exactly where in the world both of them get to find themselves as they grow up, and who they want to be, is not for me to decide. My job as a parent is to celebrate them and to love them and to make sure that they have everything they need in order to be what they want to be. And I will do everything in my power for my kids to have that right and to be protected within that.

Theron's background in South Africa was not one of acceptance, and this is a pattern that she's hoping to break in her own family. She said as much to Jimmy Fallon while appearing on his talkshow in May:

I grew up in a country where people lived with half-truths and lies and whispers and nobody said anything outright, and I was raised very specifically not to be like that. I was taught by my mom that you have to speak up; you have to be able to know that, when this life is over, you'll have lived the truth you're comfortable with, and that nothing negative can come from that. I am raising two beautiful proud black African girls and I want them to find themselves and not necessarily push my ancestry on them.

In December 2019, Theron told Pride Source that she and her girls are open about what families and relationships look like, despite the kids' young ages:

They're a little too young, but we definitely have these conversations whenever they say, "I'm gonna get married" and I'm always like, "What is it gonna be? A boy or a girl? What is it gonna be?" I love that my kids just know that that's a normal question to ask ... One of my daughters (4-year-old August) is convinced that she's gonna be married five times and it's gonna be three boys and two girls, and I just love that she has the freedom to think that way. God knows what it's going to be, but I love that she feels safe enough to explore in her little-girl brain that anything is possible and that she's gonna go and discover that for herself.

On Letting Jackson Tell Her Own Story

Theron said she got Jackson's pronoun wrong in the beginning, but she has been trying to respect her wishes since then — that includes choosing when and how to tell her story, as she told Pride Source:

It really hurt her feelings. I don’t want to be that mom, and that was really why I said what I said a while back. I haven’t really talked about it ever since, again, because outside of just asking that respectfully of the press — and the world, hopefully — the rest is really private and it’s her story, and it’s really up to her to decide if she wants to share that.

Theron always knew that she wanted adopt her future children, as she told NPR:

I wanted to believe that somehow my child would find me in the way that we were just meant to be. So I wasn’t specific with anything. … In whatever country they would allow me as a single woman to adopt, that’s where I filed. And it just happened to be that both my children ended up being American. They were born in the United States and they both happened to be African American. Everything that I hoped would happen during my adoption process did happen because these two babies were meant to be in my life — and they’re my children.

Theron is raising her children on her own, but she doesn't see that as a weakness. In her NPR interview, Theron stressed the need to accept single parents as a viable option for raising healthy children:

In a lot of places — and I think even for a lot of people and in America — it still feels very traditional in the sense that it should be that every child should have a mother and a father. We’ve kind of wrapped our heads slowly around the idea of two mothers and two fathers, but not so much around the idea of a single parent. It’s just so unfortunate. I know so many people who would be incredible parents ... My fight was a little bit easier because of my circumstances, but I would want that for all women who want to share their life and be part of raising another young, small child’s life.

Theron has many years of motherhood ahead of her with such young children, but it sounds this may be her favorite role yet.