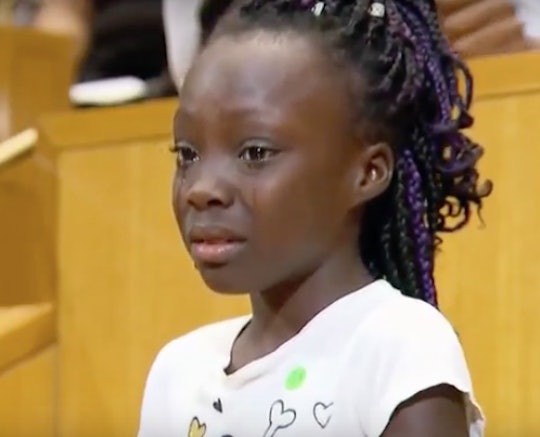 On Monday evening, residents of Charlotte, North Carolina, crowded into City Hall for the first City Council meeting since Keith Lamont Scott's death a week ago. There were many powerful moments throughout the meeting: Some people refused to stand for the Pledge of Allegiance. Others held signs that simply read "Black Lives Matter." Many criticized the way Mayor Jennifer Roberts and the Charlotte police force handled Scott's shooting. But the most powerful moment of the meeting came when a young girl spoke about Keith Scott: standing behind the podium atop a stool, Zianna Oliphant cried openly as she addressed the crowd.

As a young boy adjusted Oliphant's microphone at the podium, she said: "I've come here today to talk about how I feel. And I feel like, that we are treated differently than other people, and I don't like how we're treated just because of our color."

She had to pause as she began to cry, but was encouraged by the crowd, which cheered her on. "We are black people and we shouldn't have to feel like this. We shouldn't have to protest because y'all are treating us wrong. We do this because we need to and we have rights."

"I've been born and raised in Charlotte. And I never felt this way till now and I can't stand how we're treated," Oliphant said. She continued:

There has been plenty of controversy surrounding police shootings and the Black Lives Matter movement recently. (Just this month, the University of Vermont's Black Lives Matter flag generated a spate of backlash from some alumni, and many blamed the activist group for inciting violence against police.) In the back and forth, many have spoken over one another, and often, one side refuses to listen to the other. However, it's impossible to argue with the feelings of a crying 11-year-old, and Oliphant's speech at City Hall quiets all arguments against Black Lives Matter, stripping the movement down to its core message.

What it comes down to, when heard from Oliphant, is that innocent men and women are being killed, and their children are being forced to grow up without a parent. Kids like Oliphant who hear about the deaths of Scott, Terence Crutcher, Philando Castile, and Alton Sterling can't be offered a reasonable explanation as to why these men were killed. Nobody wants to hear a child say she "can't stand" how she's being "treated differently than other people." No one wants a child to be afraid.

At that point, all anyone can do is sit back and listen to an 11-year-old cry. That sound alone should be a massive wake-up call for those who think the United States doesn't have a problem with racism in law enforcement.