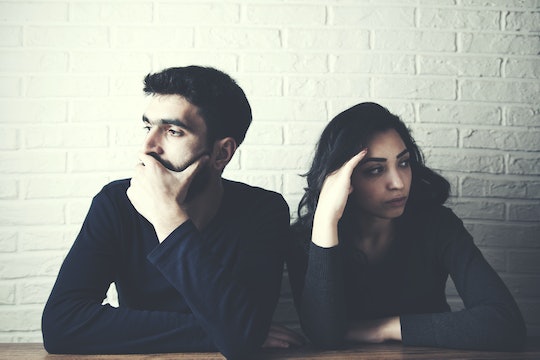 Cheating & 5 Other Things That Surprisingly Won't Impact A Divorce Settlement

The end of a relationship is hard, no matter how it ends, or what the circumstances are. And hashing out the details of a divorce settlement can be particularly tricky, even in the friendliest of circumstances. Divorces are complicated and almost never as cut and dry as you might think that they are or will be. Although there are a number of factors that need to be considered when working out a divorce settlement, you might also want to know about cheating and other things that surprisingly won't impact a divorce settlement because, all too often, it's not quite as clear-cut and obvious as you'd expect.

What sorts of factors are taken into consideration while working out a divorce settlement can vary based on state laws and other issues. So just because your friend's divorce settlement went a certain way doesn't mean that yours will be similar.

And yet, in some states, divorce settlements take different things into consideration than you'd think that they would. It's difficult even for many attorneys to predict what the settlement might look like because there are so many.

"In North Carolina, the court considers a wide variety of factors including health, age, length of the marriage, the need of a custodial parent to maintain the marital residence, non-monetary contributions of either spouse, and several more," Libby J. James, a family law attorney at Horack Talley, in Charlotte, North Carolina, explains to Romper by email. "There is even a 'catch-all' factor that is pretty much anything the court should otherwise consider. This is important because a lot of the time, clients get frustrated when an attorney says she can’t predict an outcome. There are so many factors and the weight a given judge may place on any one factor varies widely. It can be very subjective. The same goes for alimony. There are multiple factors that a judge has to consider, which makes predicting an outcome difficult."

But some of the factors that you'd expect would have some kind of impact on your divorce settlement might not actually be as influential as you might think. There are still a lot of factors, but in some cases and in some states, they might not be the factors you'd assume.

More Like This
Everyone Told Me To Date Post-Divorce, But Being Alone With My Kids Felt Better
The 35 Top Toys For 3-Year-Olds
60 Bits Of Christmas Trivia To Delight Your Friends & Family
Snap A Pic Of Santa In Your Living Room With These Free Apps